This week we begin the annual Torah reading cycle, starting with the creation of the world in the first chapter of Genesis.  Standard English translations, based primarily on non-Jewish sources, render the first words of our parasha, “In the beginning, God created the heavens and the earth.” This implies that the world as we know it started at the dawn of time.  Jewish exegetes, however, have long noted that the Torah’s opening Hebrew words “Bereisheet bara Elohim” only refer to the creation of our universe, and are more correctly translated, “When God began to create [our world]…”  That is to say, there were previous worlds that God had fabricated, and other galaxies that are part of God’s handiwork.  There is evidence in the text that this is in fact the case, for example, Midrash Bereisheet Rabbah 3:7 observes:

Rabbi Abbahu said: God created worlds and destroyed them, declaring, ‘This one pleases me; those did not please me.’ Rabbi Abbahu figured this out from the verse [at the end of the creation story] ‘And God saw all that He had made, and behold it was very good,’ as if God said, ‘This one is very good, those others were not very good!’ 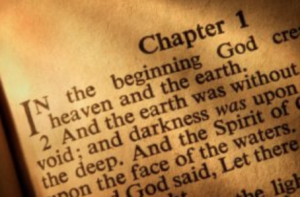 The opening words of the Bible in standard (but incorrect) translation.

s always improving.  In this way, God is modeling good behaviour for us and our children, for if even God can look at His work and say, “I can do better,” certainly we can do so as well.  One of the frustrations I experience as a teacher is students’ reluctance to re-write and improve their assignments.  Children, in general, unless they are incentivized, prefer to hand in their first draft as their final product.  I always point out to my students that, even though I myself have been writing for decades, I still pen multiple drafts of my own work; they, as much younger writers, can certainly do the same.

Of course, I really do need to revise my work to get it right, whereas God could have produced perfection on the first try.  God, then, purposely conducted several trials in order to model for humans that we should always be bettering ourselves.  Similarly, in this week’s parasha, God rests at the end of creation not because He is tired at the end of a six-day work week, but because He knows that humans will be, and wants us to have Shabbat as a day off. 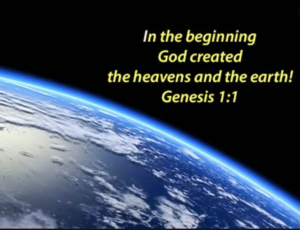 bbi Abbahu’s insight is that I appreciate his understanding that the world is always being re-created.  This year especially, his words resonate with me as we work to re-create our academic and familial worlds in the wake of COVID.  The world that began this time last year is not the same this time around.  At school and at home we have had to re-create the way we teach, the way we learn, the way we interact, the way we entertain ourselves, and the way we keep ourselves and each other healthy and safe. This is not easy. We liked our old world and wish that we could live in it still.  But God’s message is that even He had to create the world over many times, and we should not fear doing so ourselves.

Like God, the Jewish people have had to create our world anew many times.  Our ancestors Abraham and Sarah left the world of Mesopotamia to create a new nation on the shores of the Mediterranean.  Moses and the Israelites left the world of the Pharaohs to create a new life in the world of the Sinai wilderness and then—again—in the sacred domain of the promised land.  Our grandparents had to leave their worlds behind in Europe or Arab lands and create their lives anew in the New World.  And after 2,000 years in exile, early Zionists had the courage to build a new Jewish world on the drained swamps of Palestine.

Some time ago, I attended the 90th birthday party of my wife Karynne’s cousin, a dignified gentleman who had built a good life and fathered a fine family in Toronto after escaping the horrors of Hitler’s Europe.  I knew the outlines of his story (repeated with some frequency at family gatherings), but what I learned that morning was that he and his wife had first emigrated to Israel after the war and established a grocery store in the nascent Jewish state.  Economic forces compelled them to immigrate to Canada, where, yet again, they created a new world for themselves and their children at the age of 40. Being in my 30’s at the time, I could not fathom re-creating a new world for my wife and family, starting “In the Beginning” at midlife.  Our cousin’s story inspired me to believe that we all have the power to create our lives anew.

When the pandemic has passed, many look forward to returning to the world we knew.  I, however, look forward to re-creating a new world, one in which the wonderful elements of the old are combined with the insights and innovations we have gained over the months.  If the old world was good, the new world should be (as God said of His ultimate creation) very good.

Here again, it is God who serves as our role model.  We read in our morning prayers, “Hamechadesh b’tuvo b’chol yom tamid ma’asei bereisheet—God, in His goodness, renews the acts of creation each day, forever.”  The creation of the world did not happen once: Each day, God tries again to create a new and a better world.  May His actions inspire us to do likewise.