A Day of Hope and Renewal

Today is Rosh Chodesh Nisan, the first day of the new Hebrew month of Nisan.  It marks the new moon of the month that ushers in the season of renewal, called Aviv in the Torah.  In the time of the Bible, this month was the first month of the new year (the Jewish year began anew in the Spring, not in the Fall, as we observe it today).  The commandment to initiate a new calendar with this new month was also the first directive given to the newly constituted Jewish people as they prepared to begin their new lives as free men and women upon their emancipation and exodus from Egypt. Today, therefore, is a day that commemorates newness in its many manifestations.

In so many ways, our lives today feel like they have begun anew.  We are living in a new paradigm, confined to our homes and surrounded by our immediate families throughout the day and night.  We are attending school in a new way, using technology that is new to most, and interacting in ways that are new and that feel both foreign and familiar.  We are negotiating our relationships in new manners, making new friends through new electronic networks, and experimenting with new avenues and tools to keep our children and ourselves occupied in this new reality.

The newness of Rosh Chodesh Nisan, filled with joy and anticipation, contrasts sharply with the newness we are experiencing as a result of the new Coronavirus.  We do not welcome this new state of affairs that has turned our lives inside out and has separated us from our friends, neighbors and comfortable routines.  In this time of anxiety, let us turn to the newness of Rosh Chodesh Nisan and see if we may find in it wisdom and guidance during these difficult days. 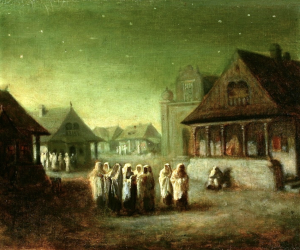 Painting of Jews gathering outside to recite Kiddush Levanah.

The joy of Rosh Chodesh Nisan derives from it signaling the end of the long, dark winter.  It is the month when the weather begins to turn and, in ancient Israel, when the new grain sprouted after having been dormant since the fall.  Both people and crops finally emerged into the light after having been inside the ground or their homes during the cold season. Rosh Chodesh Nisan teaches, therefore, that there are regular periods of darkness in life.  While they are unwelcome, they are to be expected.  All life ebbs and flows as this is part of the pattern of the world in which we live. With the annual solar cycle it is of course easier to see and predict the ups and downs, but these rhythms exist in history as well, as those who have lived through eras of war and peace or hardship and prosperity can attest.  What we can learn from this is that all dark times end with light, and difficult epochs do not last forever.  As we read in Psalms 30:5, “…sadness may stay for the night, but rejoicing comes in the morning.”  It is difficult to see this cycle when we are in it: when we are in good times we think they will never end, and when we are in hard times they, too, feel like they may last forever.  We should use Rosh Chodesh Nisan as a time to remember the eternal cycle of life to assure us that this too shall pass.

Rosh Chodesh Nisan reminds us of our connection to the moon.  Every Rosh Chodesh represents the new moon, and the onset of the 30-day lunar cycle of waxing and waning.  When God commanded us to make this the first month of the year, He was also establishing the linking of the Jewish calendar to the moon.  While respecting the solar cycle of the seasons, the Hebrew calendar is based on lunations.  Our sages saw in this an allusion to the Jewish people itself: we mark our time by the moon because our story mirrors the apparitions of the moon.  Just as the the moon waxes and wanes but never disappears, so too the Jewish people go through periods of triumph and tragedy yet have never vanished in our 3,500-year history. 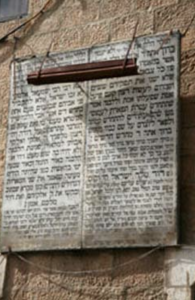 Many synagogues post the words of Kiddush Levanah outside their buildings in large letters for people to see in the dark. When students make the letters in their notebooks too large their Hebrew teachers say, “You are writing in Kiddush Levanah letters!”

On the first Saturday night following Rosh Chodesh, we gather outside the synagogue, gaze at the new moon and express these sentiments in the prayer called Kiddush Levanah—The Blessing of the Moon:

Blessed are you, Lord our God…who told the moon to renew itself for Israel, for they are destined to be renewed like it…

The unique experience of our people can be a source of comfort to all during this period of human history, and we should use this Rosh Chodesh as a time to uplift others with our story of perseverance and hope.

Finally, Rosh Chodesh Nisan marks the onset of the season of redemption.  The Talmud teaches (Rosh Hashanah 11a) “Just as in Nisan we were redeemed in the past [when we were liberated from Egypt], so too in Nisan we will be redeemed in the future.”  We believe that history repeats itself, and just as God did not allow our suffering to endure in Egypt, he will not allow our present pain to continue either.

In synagogue, on the Sabbath before Rosh Chodesh, there is a special prayer that is recited to bless the new moon that will appear in the coming week.  Since synagogues were closed this past Shabbat, we did not have the opportunity to recite this blessing together as a community for Rosh Chodesh Nisan.  I find the words of this benediction to be particularly prescient, and I share them with you, the Akiva community, as a blessing for us all:

May the One who performed miracles for our ancestors and redeemed them from slavery to freedom, redeem us soon, so that we may be united in friendship.  And let us say: Amen