A School as Sweet as Honey

I had the pleasure this summer of spending time with the first president of the Akiva School, Charles Solomon, and his wife Chana, in their apartment in Jerusalem. In addition to enjoying their warm hospitality, I hoped through my visit to gain insight into our school’s founder, Rabbi David Hartman, and to better understand his impetus for launching the bold educational experiment that was the Akiva school. I was struck by the observation of Mr. Solomon that, above all, Rabbi Hartman wanted to create “…a place where students loved coming to school…and didn’t hate it.” To understand the profundity of this seemingly incontrovertible goal, we need to explore, briefly, the history of general and Jewish education. 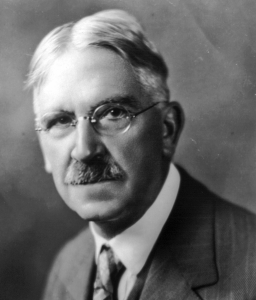 In the early 1900’s, the great American philosopher and psychologist, John Dewey, was troubled by what he saw in schools. In his research he wrote that the prevailing atmosphere in schools was repressive, and the learning dull. He dedicated his life’s work to developing a methodology of education and curricula that would transform learning and make “…going to school…a joy.”

Dewey was perhaps the most prominent and influential educational reformer of his time, and his innovative strategies for enhancing the pleasure of learning were celebrated in the United States, Canada, and around the world. Yet by the end of the 20th century, little had changed. In 1984 after John Goodlad conducted his ground-breaking study of over 1,000 classrooms, he was compelled to ask, “Why are our schools not places of joy?” Goodlad’s book was still pertinent when it was reissued 20 years later.

Amidst this grim reality, there were individual schools around the globe that were successfully implementing elements of Dewey’s vision, creating enjoyable learning environments where students thrived and took pleasure in learning. Rabbi Hartman was inspired by one such school right here in Montreal, and had the bold idea to create a Jewish school on this model. Thus, the Akiva School was born.

Creating a Jewish school on Dewey’s paradigm in the 1960’s presented a dual challenge. In addition to the cultural forces that prevented secular schools from being places of happiness and discovery, the Jewish world was still in the immediate wake of the Holocaust. Jewish studies were fraught with the weight of preserving a tradition that was nearly obliterated, and felt compelled to teach about the unfathomable horrors of the Shoah. Precisely how Rabbi Hartman navigated these difficult pedagogical waters will be the topic of a future essay. 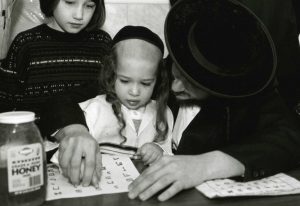 Chassidic boy learning Hebrew for the first time with honey on the letters of the alphabet.

One of the wells Rabbi Hartman drew upon in designing his school was the hoary Jewish tradition of the joy of learning. Long before Dewey, rabbis and rabbinic scholars had identified love of learning as axiomatic for Jewish study. Our sages coined the term ahavat Torah—the love of Torah – to describe their approach to study. In a beautiful illustration of this principle, Rabbi Eleazar of Worms (1160-1230) describes how when children were taught the Hebrew alphabet on their first day of school, it was customary for the teacher to put a drop of honey on each letter, so that when the students learned a new letter they would taste the honey and always associate study with sweetness. As we look forward to the use of honey during the High Holiday season, it is inspiring to recall this ancient and beautiful custom.

Over 50 years later, love of learning remains at the core of the Akiva experience. Hartman’s vision as expressed by Mr. Solomon remains true today, and we remain committed to having a school where learning is a joy. Whenever we introduce new initiatives—our Innovation Lab, our new Language Lab, our new League Quebecoise, our new Shakespeare unit—it is with an eye to creating a more joyful experience for our students, so they go home saying “We love going to school!” just as Rabbi Hartman hoped they would.