A Year of Forgiveness

Today is Rosh Chodesh, the beginning of new Hebrew month of Elul.  Elul marks the beginning of the season of forgiveness, leading into Rosh Hashanah, the holiday of repentance, including Yom Kippur, the Day of Atonement, and concluding with Hoshanah Rabbah, the end of the High Holiday season.  For the next two and a half months, all Jews are enjoined to ask forgiveness of their friends, their family, and of God.  Our rabbis teach that this propitious time for reconciliation can be traced back to Moses, who ascended Mount Sinai on this day, over 3,000 years ago, to ask for forgiveness for the sin of the golden calf.

God wrapped Himself in a tallit like a cantor and said, “Whenever Israel sins, they should pray like I am showing you…”

Forgiveness, as the word suggests, is a gift we bestow upon others; the word itself is derived from the words “for” and “give”. By being forgiving we give others the ability to let go and move on, we relieve their burden and lighten their load.

Forgiveness is also something we do for ourselves, and here it works in two ways.  First, by forgiving others, we relieve ourselves of anger and resentment, emotions that eat away at our souls.  Carrying grudges embitters us and prevents us from enjoying our own lives.  Sometimes we forgive others not because they merit our forgiveness, but because we cannot let others have such power over us.

I lived in the United States in the aftermath of 9/11.  It was a most difficult time, filled with anxiety and suspicion, filled with the worry of further danger ahead.  This pain was greatly eased, however, by a new spirit of forgiveness that permeated society.  Intuiting the feeling of general malaise, people stopped sweating the small stuff.  If a sandwich you ordered came without the lettuce you requested, you did not send it back or complain about the lousy service.  You just forgave, and let it go.  If your children misbehaved, you understood that they were going through a difficult time.  Instead of reprimand and anger, you absolved and moved on.  The state of national forgiveness lasted only about a year, but it made that most trying time so very much easier.  With widespread forgiveness, a great weight was lifted off a world so weighed down with grief and angst.  We would all benefit now from a similar year of mutual reprieve. 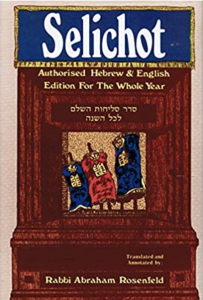 Cover of the book of penitential prayers recited during this season of forgiveness.

The Talmud (Rosh Hashanah 17b) teaches that when Moses was on Mount Sinai begging forgiveness for the apostacy of the golden calf, God wrapped Himself in a tallit like a cantor and taught Moses how to pray for forgiveness.  God said, “Whenever Israel sins, they should pray with these words, and I will forgive them.”

Since that time, the Jewish people have used the same words that God taught Moses to ask for forgiveness.  This formula, known as the 13 Attributes, is the central feature of the penitential prayers that Sefaradim began reciting today (Ashkenazim begin later), and that will continue to be repeated daily in the weeks to come:

“The LORD! The LORD! Compassionate and gracious, slow to anger, abounding in kindness … forgiving iniquity, transgression, and sin…”

These words teach us that the essence of God is forgiveness.  In living a year of forgiveness, we will be that much closer to God, imitating His ways.  To forgive, is divine.