For our annual Father’s Day outing this June I asked my sons if I could take them to the Kingston Penitentiary.  They agreed, but only after my assurance that they would be returning with me to Montreal afterward, and that the prison has been decommissioned since 2013.  While the choice of venue may have seemed odd to my children, since opening to the public ten years ago Kingston Pen has become among the most profitable and frequented federally operated tourist attractions in Canada. 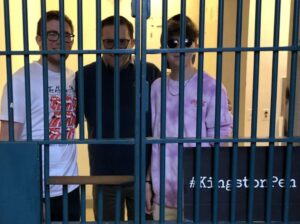 The Grossmans boys behind bars.

Our society’s fascination with jailhouses extends well beyond their high guarded walls, and there is a veritable cottage industry of video games, television series, reality shows, and feature films that release content to satisfy our prurient interest in incarceration.

This preoccupation with prisons points to a hunger in the human psyche for people to be punished.  In every society and in each epoch of world history, systems of law and justice embrace punishment as the swift and satisfying mechanism for redress of grievance.  Outside the legal system punishment also reigns supreme:  whether it is parents disciplining disobedient children or tribal honour killings, humans seem hard-wired to seek punishment as the go-to reaction for righting wrongs.

The Scriptural readings of Yom Kippur speak to this need to see the guilty punished.  While the morning kriyah deals entirely with the sacerdotal duties of the High Priest on the Day of Atonement, the lection opens by recalling the execution of Aaron’s two sons, who were immolated by divine fire as punishment for offering an unsolicited sacrifice in the Tabernacle.  The Mincha Torah reading too concludes with fierce punishments:  karet, the heavenly death penalty, and an anthropomorphic Land of Israel that vomits out violators of God’s law.

While the severity of these retributions may shock my modern sensibilities, as a believing Jew I find it reassuring to know that we live in a world where God sees to it that criminals have their comeuppance.  As an educator, however, I am disturbed.

Except for the irredeemably wicked, the goal of discipline is to steer the sinner onto the right path.  This was indeed the stated purpose of the Kingston Penitentiary when it opened its doors in 1835.  The term penitentiary, familiar to us from the High Holiday liturgy, was chosen to reflect the facility’s aim to lead its inmates towards penitence.  But this goal was seldom realized in Kingston, or any correctional institution.  From felons to misbehaving children, punishment breeds resentment and anger and exacerbates bad conduct; recidivism is all but guaranteed.

There is another way.  Instead of punishment, behaviour can be changed through education.  By showing transgressors the path of righteousness and its rewards, people who, at their core, wish to do the right thing, can be led out of sin.  This is the message of the Torah reading for Rosh Hashanah.   Our foremother Sarah committed the sin of laughing at God when He promised that she, a post-menopausal woman, and her nonagenarian husband, would be granted a child.  Sarah compounded her transgression by lying when she was confronted for mocking God and Abraham by her laugher.  The Rosh Hashanah leining begins with God’s fulfillment of His promise with the birth of Isaac.  Instead of punishing Sarah for her impertinence, God shows Sarah that she was mistaken by fulling His word.  By following through with His promise, God answers His own rhetorical question: “Is anything too wondrous for the LORD? I will return to you at the same season next year, and Sarah shall have a son! (Gen 18:14).”  By rewarding instead of penalizing, God teaches Sarah to be a woman of faith.

The Torah readings of the High Holidays begin on Rosh Hashanah by presenting education as the ideal corrective, and end on Yom Kippur with punishment as the last resort.

There is, however, a coda to this progression that is found in the final biblical reading of the Yamim Nora’im: the Book of Jonah. 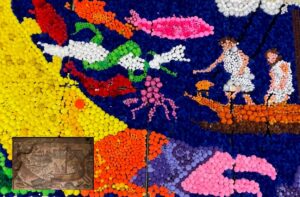 Artwork based on stories from the Book of Jonah by Akiva Grade 5 students replicating an ancient mural with colourful pompoms.

The prophet Jonah is God’s warden.  He stands guard in defense of the Divine Law and asserts that all who have transgressed the ways of the LORD, including the people of Nineveh, must be punished.  God, ever the educator, wishes not for the city’s destruction, but for its people to learn to do what is right and good. Jonah, as it happens, is a better teacher than he wishes to be, and, despite himself, is successful in turning Nineveh’s citizens from their evil ways.  A hardened officer who lives only in the world of strict justice, Jonah is distraught when God relents and does not exact retribution upon Nineveh.  Jonah prays for death, for he cannot live in a world where wrongdoing is addressed through education.

The High Holidays present us with two possibilities for penitence: Punishment and Education.  Should it be necessary, God is prepared to punish.  But the last words of the Almighty that we quote on the Yamim Nora’im, spoken by God to Jonah, reveal the LORD’s preference for education:

“Should not I care about Nineveh, that great city, in which there are more than a hundred and twenty thousand persons who do not know their right hand from their left, and many beasts as well?”

God recognizes that, as mortals, we are more like animals than angels, not knowing right from wrong, left from right.  Like animals, we need training to do what is expected of us; unlike beasts, we are capable of moral reasoning if we are willing to be taught.

The educational model for righting wrongs is at the core of Akiva’s approach to our students.  We put into action God’s message that it is our duty to train children to know right from wrong, and teach them how to behave in a way that is consistent with the values of the Torah and the mission of our school.

As we stand in judgment during these Days of Awe, we beseech God to respond to our shortcomings not as our disciplinarian, but as our teacher.  In the words of the Machzor we pray:

May it be Your will, O LORD my God and the God of my ancestors, that I sin no more.  And as for the sins I have committed before You, wipe them away—not by punishment!—but in Your abundant mercy.

Karynne, Ezra, and Max join me in wishing the Akiva community a year filled with God’s abundant love and mercy.