Cast Me Not Off

Cast me not off when I am old; forsake me not when my usefulness fails.

Mr. Stein would not sell you a book unless he thought you worthy of reading it.  His books were located on the ancient shelves of his store—behind the counter and out of reach of customers.  No browsing. If you requested a book and he did not think you capable of appreciating its merits, he would refuse to procure it.  If you persisted, he would deny that he owned it, even if it were in plain sight. When I lived in the Holy City, I would frequent Mr. Stein’s shop and ask for various volumes to see if he thought me deserving of them; as a poor yeshiva student this was simultaneously an economical form of entertainment, and an exercise in measuring my perceived intellectual worth. 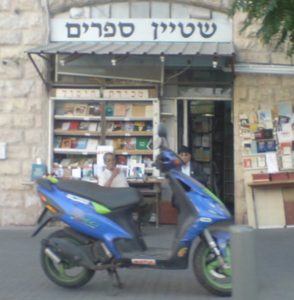 This was one of the many eccentricities of the proprietor of the iconic Stein Books of Jerusalem.  Another quirk was his refusal to sell newspapers in his shop.  To Mr. Stein, this was a matter of principle: “Anything written today to be thrown out tomorrow,” he asseverated, “is not worth reading.”

As a lover of journalism, I cannot agree with Mr. Stein’s sentiment.  And yet, I appreciate his sensitivity to the value of the written word.  Once words are committed to writing, they obtain a certain esteem, and the daily process of tossing tabloids into the garbage or recycling bin cheapens and attenuates the art of writing itself, as Mr. Stein suggests. 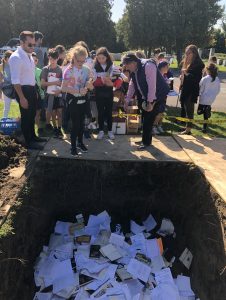 Our grade 6 students at the genizah this past September.

In Judaism, we have always abstained from wantonly ridding ourselves of used writing.  Holy books, either Scripture itself or works containing the name of God, are never thrown away, even after they are worn out or unneeded.  Such books and papers, including used Torah scrolls and disintegrated parchments from tefillin and mezuzot, are gathered together and placed either in a vault called a genizah, or buried in a Jewish cemetery.  At Akiva, we collect used holy writings in a box in our Staff Lounge, then take them to be buried once a year; this past September, our Grade 6 students participated in the genizah interment process.

Writings that are consigned to the genizah are called Tashmishei Kedusha—Items of Holiness. Their holiness derives from the fact that they contain words of Torah.  There is another category, however, called Tashmishei Mitzvah—Items of Mitzvah.  These are objects that are not holy in and of themselves, but rather have been used in the performance of a religious ritual.  These include, for example, a broken shofar or a worn-out tallit.  Such items are not holy enough to merit burial, so what is to be done with them when they have outlived their usefulness?

The best way to deal with Tashmishei Mitzvah is to repurpose them for another mitzvah.  For example, there is a custom to keep lulavim after Sukkot and use them as fuel to burn our chametz before Passover. 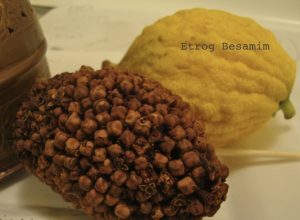 Before and after the etrog has been studded with cloves. The sweet-smelling product is called a pomander (from the French pomme d’ambre, apple of amber).

This week I taught our Grade 4 students about Tashmishei Kedushah and Tashmishei Mitzvah.  The opportunity arose because, after Sukkot, we found ourselves surfeited with used etrogim.  Since they were used for the mitzvah of shaking the lulav and etrog, they are Tashmishei Mitzvah, and should not just be thrown out.  We decided instead to have our Grade 4 students transform the etrogim into spice “boxes” for the upcoming Grade 4 Havdallah on February 1.  The students used pencils to poke holes into the etrogim, then inserted cloves into the holes.  The etrogim will now sit for two months, enough time for the fruit to shrink and form a tight ball that will be used in the Havdallah ritual.

In teaching our students about the laws of Tashmishei Kedushah and Tashmishei Mitzvah we are imparting important lessons both about Jewish law, and about interacting with their environment.  We live, increasingly, in a disposable world. More than at any other time in history, our children are growing up in a time when items from books to toys to major appliances are built to be used and thrown away.  Judaism teaches us to respect the importance and value of every item that was thoughtfully created.

Mr. Stein is no longer with us, the printed word is being replaced by the screen, and newspapers are disappearing.  But we should never discard Mr. Stein’s valuing of books, writing, and objects of significance, rather we must repurpose it for a new generation.