During the Chanukah season it is traditional to reflect upon the relationship between Jewish and Greek civilization.  The story of Chanukah celebrates the literal and figurative victory of Judaism over Greek cultural and military forces in the battle between Jews and Seleucids (the Greek/Hellenistic kingdom of ancient Syria).  Jewish values and Greek values differed profoundly on topics such a monotheism, modesty, idolatry, and eating. The triumph of the Maccabees over the forces of Antiochus IV meant that as Jews we could maintain our sacred traditions and our unique views of the world.

Chanukah is a particularly musical holiday with songs sung around the menorah and during holiday festivities.  At Akiva, we celebrate the connection between Chanukah and music with our annual Chanukah recital, which took place yesterday morning. In light of the confluence of Chanukah and music, I would like to explore the different philosophical approaches that Jews and Greeks have to music.

The English word music comes from the Greek mousikē, meaning, “[the art] of the Muses.”  The Greeks believed the Muses to be inspirational goddesses, divine forces that roused people to compose beautiful works of art.  Euterpe was the goddess who was thought to move humans to compose lyrics and tunes.  The Greek view of music is therefore rooted in polytheism, planted in a theology that is anathema to Judaism.

There is another fundamental difference between the Jewish and the Greek view of music.  While polytheistic, the Greeks believed that music was divine.  The Greeks sensed that there was something otherworldly about music, and that it must come from God or, as the Greeks would have it, from the gods.  There is something intuitive about the Greek view of the origin of melody; when we sing or hear a song played, we feel transported to a higher plane of existence, as if we were acted upon by a heavenly force.

It is fascinating, then, that the Torah takes the opposite view of the provenance of music.  In Genesis 4:21 we are told that music was invented by Yuval, a man from the 7th generation of humans.  The Torah tells us, “…[Yuval] was the father of all who play stringed instruments and pipes.”  In contrast to Greek thought, Judaism believes that music is not a divine gift, but a high form of human creativity.

One of the foundational principles of the Akiva School is our commitment to creativity.  Our founder, Rabbi Hartman, believed that human creativity was essential to a Jewish education.  This was considered to be a revolutionary idea at the time: when Akiva was founded over half a century ago, Judaism was focused on the transmission of tradition; inspiring innovation was considered to be a secular enterprise.  We see in the Torah’s story of Yuval the truth of Rabbi Hartman’s insight: music, which even the Greeks associated with the divine realm, is celebrated by the Torah as a product of human creativity.

The importance of music in Jewish holidays and rituals has an added dimension: while the Greeks saw music as a divine gift to humans, we believe that music can be a human gift to the Divine.  When we use music in our prayers and sing Jewish songs, we are offering God the greatest gift we can give, the product of our own creativity. 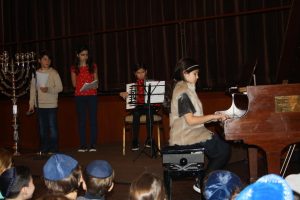 Congratulations to all of the creative and talented performers in this year’s Pre-Chanukah concert for filling our ears and hearts with your music, and sharing with us your talent and creativity.  A special thank-you to Petra Niederhauser for arranging and organizing our concert again this year.