Rabbi David Hartman, founder of The Akiva School, was known in Montreal and throughout the Jewish world as a powerful preacher, intrepid cleric, popular philosopher, and institution builder.  He was also an exceptional basketball player.

Rabbi Hartman grew up in Brooklyn where he was a local legend on the basketball court, famous for his deadly two-handed set shot. Playing in a semi-pro league in the 1940s, Dr. Hartman outscored the vaunted Celtics player Bob Cousy: Hartman 24, Cousy 18.

While Rabbi Hartman used basketball for recreation, the sport’s most lasting impact on him was in the realm of the ideological.  It was on the court, Rabbi Hartman would later recall, that he first discovered the values of equality and pluralism. 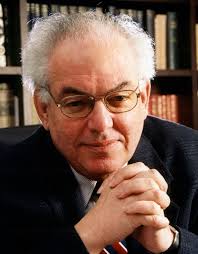 Rabbi Hartman had a fervently Orthodox upbringing, living a sheltered life in a pious family within the strictures of the chareidi community.  It was on the urban basketball court where youths of all races and creeds converged, that Rabbi Hartman first experienced the equality of all humanity.  Reflecting on his moment of discovery, Rabbi Hartman explained, 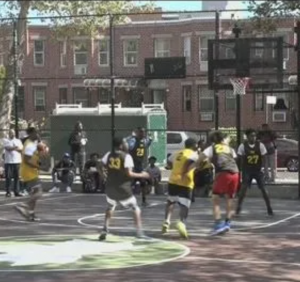 Basketball court in Brownsville, Brooklyn where Rabbi Hartman grew up.

On the basketball court, no one asked you what your religious affiliation was, and what your ideology was. The elbow that I used to get under the boards made no distinction of religion, faith or philosophy.

This revelation would inform his thought and his writings for his entire rabbinic career.

When I first met Rabbi Hartman in 1990, he was already a powerful public intellectual, advocating for religious tolerance, diversity, and democracy.  When he held forth on these topics he always spoke volubly and with unrestrained passion.  But he was most fervent when he spoke of the empathy that Jews owed to people of other religions and races.

One day, while living in Detroit, I recall listening in my car to a tape of Rabbi Hartman speaking of Judaism’s relationship to gentiles in general, and to the African American community in particular.  His voice was so filled with passion and invective that I had to pull over to the shoulder to listen, fearing I would lose focus on the road.  How striking that I was living in the cradle of American racial tension, and the most moving message I heard about race and reconciliation came from a Canadian rabbi then living in Israel.

Rabbi Hartman believed that Judaism had a unique message of tolerance to share with the world.  This teaching, he averred, predated modern notions of social justice or civil rights; it was found in the writings of the rabbis of the Talmud, who saw the diversity of humankind as a Divine ideal.  Rabbi Hartman was candid and unrestrained in confronting racism in American, Canadian, and Israeli society, and was unrelenting in his efforts to expunge it from the Jewish community and its ecclesiastical leadership.

Rabbi Noam Zion of the Hartman Institute in Jerusalem used to keep a basketball in his office to remind him of that moment on the court when his teacher was called to his mission to spread the message of God’s love for all of humanity, regardless of colour or creed.  Now, whenever I see our Akiva students playing basketball, I imagine him courtside, inspiriting our students to be kind, just, and fair, on the court and off.

As we look to the protests, riots, and anger radiating from the United States in the wake of the murder of George Floyd, the Akiva community turns to our founder, Rabbi Hartman, for light and guidance.  In our classrooms and our community, we teach our children to love and respect our brothers and sisters of all races and religions.

Let us follow the words of our sages (Tosefta Sotah 7:12) that Rabbi Hartman cherished:

Make for yourselves a heart of many rooms…for we are all children of a single Shepherd.