When the Israelites arrived in the Promised Land, they brought with them four objects they had acquired at various occasions during their journey.  Each item bore witness to a story from their past, and carried with it lessons that would be transmitted to future generations.  These objects were carefully guarded, for their transport was mandated by a promise or command.  They were: A jar of divine food, a magical rod, a coffin of bones, and two slabs of stone.

Of all of these four, we are perhaps most familiar with the two tablets of stone that Moses brought down from Mount Sinai.  The significance of the stones goes beyond their contents—the Ten Commandments; they are also a physical testimony to the experience of the Israelites at Sinai.  The Torah calls the tablets The Edut, The Witness, for the stones themselves bear witness to the greatest event in our history, God’s revelation to our ancestors; they recall the story of that singular event.  The tablets were kept in a special box—the Ark of the Covenant. 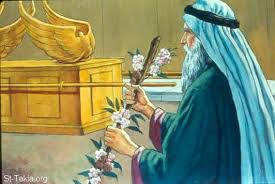 Aaron’s Rod and the Holy Ark containing the Tablets

In front of the Ark was another keepsake—Aaron’s magical rod. This is the staff that Aaron used to bring forth plagues in Egypt, and it is the rod that magically turned into a snake before Pharaoh.  During their time in the desert, the Israelites were rebellious and questioned Aaron’s leadership, whereupon God caused the dead wooden rod to miraculously sprout buds, proving that Aaron was endowed with God’s power. After this incident the Torah reports:

The Lord said to Moses, “Put Aaron’s staff in front of the ark of the covenant law, to be kept as a sign to the rebellious.” (Numbers 17:10)

Every time the Israelites saw the rod, they were reminded of the story of the rebellion and its moral: never oppose God’s chosen leader.

The oldest artifact the Israelites carried with them was the coffin with the bones of Joseph.  In the last verses of the book of Genesis we read of the promise that Joseph extracted from his family:

Joseph made the Israelites swear an oath and said, “God will surely come to your aid, and then you must carry my bones up from this place.” (Genesis 50:25)

And when the Israelites left Egypt, they made good on their promise:

Moses took the bones of Joseph with him because Joseph had made the Israelites swear an oath… (Exodus 13:19)

The bones of Joseph were a physical memorial of the story of Joseph and the experience of the Israelites in Egypt.  They were also a reminder that God keeps His promises.

During their desert journey, God fed the Israelites with manna, divine food that literally fell from heaven.  So that the Jewish people would always have tangible proof of this miraculous sustenance, God commanded,

“Take a portion of manna and keep it for the generations to come, so they can see the bread I gave you to eat in the wilderness…” (Exodus 16:32)

The words of this verse, “…keep it for the generations to come” is the underlying message of all of these four keepsakes.  They were passed along from generation to generation—mi dor l’dor in Hebrew—as a physical trigger for the rich memories they recall. 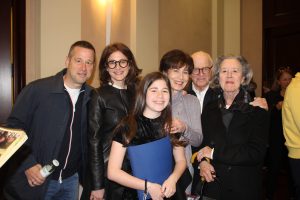 This week, our Grade 5 students carried on the biblical tradition of passing along objects mi dor l’dor—from one generation to another—and telling their stories.  In an Akiva tradition that also goes back generations, our children, parents, grandparents, and even great-grandparents, presented objects and family heirlooms that had been passed along from parent to child for generations, and told their stories.  Holy books, jewelry, kitchen tools, and rugs were among the artifacts that told of stories of love, escape, warning, and blessing.  We thank all of the participants for inspiring us with their items and ideas, and for sharing a part of their family with ours.  A special thank you to Akiva grade 5 teacher Anat Mazor, assistant Johanna Cohen, Judaic studies coordinator Tali Revah-Sibony and all grade 5 families for sharing their stories.