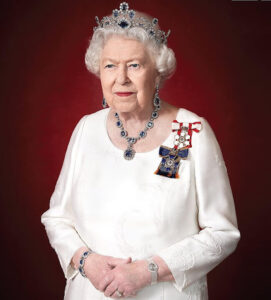 Official portrait of Queen Elizabeth taken by Chris Jackson at Windsor Castle in March 2019 and officially released by the Canadian government in honour of her ties to the Commonwealth nation.

In antiquity, the passing of years was numbered by the reign of the living monarch, thus we find in the Bible, “In the twentieth year of Jeroboam king of Israel (1 Kings 15:9),” or
“In the first year of Cyrus king of Persia (Ezra 1:1).”  The death of a sovereign meant the end of an era, for no longer would time be marked in the same way.

The passing yesterday of Great Britain’s Queen Elizabeth II is significant to us not only because she was Canada’s Head of State, but also because her death marks the end of an era for our country, the Commonwealth, and the world.

Her death is also meaningful to us as Jews, as monarchy is central to the religion and politics of the Jewish people. The High Holidays, which are soon upon us, center around the theme of God as King, and the tefillot of Rosh Hashanah and Yom Kippur open with the declaration of the Lord as hamelech hayoshev al kisei ram v’nisa—the King who sits upon a high and lofty throne.”  Every day of the year in our prayers we affirm our acceptance of ol malchut shamayim, the yoke of the Kingdom of Heaven, and we pray for the reestablishment of malchut beit David, the Davidic monarchy, which ended with the death of the last king of Judah.  Monarchy represents for us both Divine eternity and earthly temporality; the death of an earthly monarch reminds us of our own mortality, and that, in our world, only God is timeless. 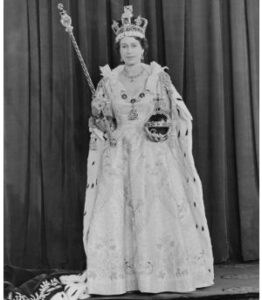 Queen Elizabeth II at her coronation in 1952.

Queen Elizabeth II, who ascended the throne at the age of 25, had not a moment to mourn the death of her own father before she was called upon to lead her people.  For the next 70 years she would continue to lead a life of devotion and service. She worked until the very day before she died, her last duty to the palace was overseeing the transition of power to the new government of England.

We live in an age when monarchy and its values feel foreign and outdated.  Unelected power, unearned wealth, ceremonial leadership and pomp seem like relics of a time gone by.  But the life of Queen Elizabeth reminds us of the best values of monarchy, virtues to which we can aspire and which we may inculcate in our children.  Queen Elizabeth lived a life of duty and spent nearly all her years, from her time in the army to her time on the throne, occupied with the welfare of others.  Our children today are engulfed in a culture that focuses on the self and that venerates leaders and celebrities who are obsessed with image and personal gratification.  As Jewish parents and Jewish educators we are counter-cultural, espousing the ancient Jewish values of responsibility, obligation to others, ethical obedience, and faith in a higher calling.  Queen Elizabeth exemplified a life lived fully in accordance with these profound Jewish values; she was a role model and an inspiration.

The Queen is dead; long live her values in our hearts and the hearts of our children.