Sanctuary and Sacrifice – Message from the Head of School

The Torah contains an odd number of books perhaps in order that one book be in the middle and thus allow us to say: here is the center of God’s message to us.  That book is Leviticus, and its central message is Sanctuary and Sacrifice.

Leviticus, which we begin to read this Shabbat in synagogue, has no plot.  Unlike Genesis, Exodus, Numbers, and Deuteronomy, it contains no stories of Creation, Redemption, Wandering, or Rebellion.  Instead, Leviticus speaks of the Tabernacle, God’s sanctuary, and the ritual sacrifices that were to be offered there to the Lord.

With its animal immolation, grain offerings, and wine libations presided over by vested priests, the world of Leviticus can seem very distant to us.  But watching the unfolding crisis in Ukraine, I feel that its message of Sanctuary and Sacrifice has renewed relevance. 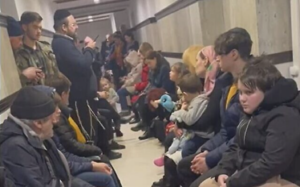 Jewish Children Taking Refuge in a Synagogue in Kyiv

The President of Ukraine understands the meaning of sacrifice.  Offered the opportunity of safe passage out of his war-ravaged homeland, he chose instead to stay, even if it means sacrificing his own life.  Through his actions, he has inspired his people to sacrifice for their nation, themselves taking up arms to defend their land and liberty.  Like the sacrifices of the Tabernacle that were burned in fire, the citizens of the Ukraine have watched their homes and villages go up in flames.

The central sacrifice of the book of Leviticus is called in Hebrew the olah offering.  The English term for the olah is the holocaust offering, meaning that it is burned in its entirety, until nothing of it remains.  For the Jews of Ukraine, the death and devastation they are witnessing recalls the destruction of their community and their families during the Shoah, which had been executed in many cases by their fellow Ukrainians.  Today, it is a Jew who bravely leads the fight against annihilation; for our people, there is an added pain of memory and additional sacrifice. 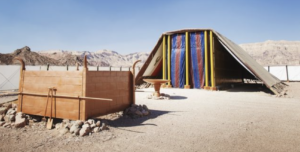 The Tabernacle and its Bronze Altar of Refuge

The war in Ukraine reminds us of another meaning of the word sanctuary: a place of refuge.  This connotation comes from the laws of the Tabernacle, which allow people to seek shelter and protection in the Sanctuary when they are fleeing for their lives.  In the center of the Tabernacle was a bronze altar on which sacrifices were brought; refugees were permitted to enter the Sanctuary, grab the corners of this altar, and thereby be protected from those seeking to do them harm.  The place of sacrifice, the altar, is thus also the place of sanctuary.

The Tabernacle was God’s home, the holiest spot on earth, and  God invites refugees into His home.  When we provide shelter, safety, and comfort for refugees, we are involved in holy work, imitatio Dei, imitating the Divine.  It is estimated that there are over 2 million people who have fled Ukraine since the invasion began.  Volunteers in our community and around the world are working nonstop to aid these refugees. Akiva parents spearheaded a Mishloach Manot fundraiser; Akiva staff have been raising funds among their colleagues; Akiva volunteers are delivering unclaimed items from our lost-and-found to Ukrainian child refugees. Anything we can do to support such efforts is holy work.

The Book of Leviticus contains hundreds of laws that prescribe the actions performed in the Tabernacle, but no words were ever spoken in its precincts; our rabbis dubbed it Mikdash Hadimamah, The Sanctuary of Silence.  As parents and educators we struggle with what we should tell our children about what is going on in Europe.  Let us take, then, a lesson from Leviticus: Actions are more important than words, and what we do now to help Ukrainians in their struggle and refugees in their plight is far more significant than the words we say about the crisis.  Finding opportunities as families to volunteer and provide aid should be our primary goal with young children, most of whom only need to know that there are people suffering who need our help.

This has been a particularly frightening two years for our children, and words that place them in a heightened state of anxiety will neither do them, nor Ukrainians, any good.  While the Sanctuary was silent, our world is not; it is filled with words that our children are listening to, background chatter from televisions, radios, and devices broadcasting information that little ears hear. We must be sensitive to what our children are exposed to and navigate the fine balance between not providing too much information, and contextualizing the messages and terminology to which they have already been exposed.

When our children ask questions, we do not want to avoid talking about the subject, and it is wise to be prepared to answer questions in an age-appropriate manner.  Grade 1 gets a different answer and level of detail than grade 6.

As an overall message, we can share that far away there are people who are doing bad things, and good grown-ups are working to stop them.  Our children should know that they are safe, and we pray for those who are not.

For those older children who require more depth of explanation, I suggest returning to the twin themes of Leviticus: Sanctuary and Sacrifice.  We can tell our children about people who are providing safety for those who are running away from bad things.  Inform them of the mitzvah of sanctuary, of providing refuge, that Canada and Israel, our home and homeland, have opened their borders to those seeing asylum.

Finally, we can teach our children the importance of sacrifice, of people who are brave and fight for what is right.  Our tradition is filled with such people: Moses, Judah Maccabee, Queen Esther, and our namesake, Rabbi Akiva.  To this list we may add Volodymyr Zelenskyy and his intrepid citizens, may God rescue and protect them, and grant safety and sanctuary to those who fight and sacrifice.