This Victoria Day, I made a pilgrimage to the site of the glorious Expo ’67 World Fair.  Just over 50 years ago, Montreal was the venue for an exposition that displayed the greatest achievements of human innovation and creativity in the mid 20th century.  Two years later, Rabbi David Hartman founded the Akiva School, boldly placing human creativity and innovation at the heart of Jewish education.  I like to imagine that the great exhibit of human spirit on display at Expo ’67 was a muse for Rabbi Hartman in the creation of his sui generis school. 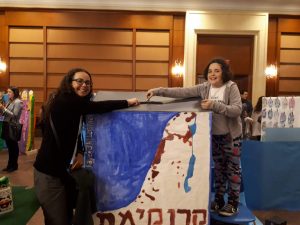 As a tribute to the 50th Anniversary of the Akiva School, our students and teachers created an Academic Fair in the spirit of Expo ’67.  Last night, our community experienced all of the wonder of an Akiva education in a visual spectacle that included verdant forests and virtual oceans, a giant pushkeh and a Polish village, a monument to emancipation and mailboxes from two continents.  Like the World Exposition, the Akiva Academic Fair featured nations from around the world including France, the United States, Israel, Poland, and, in one exhibit, every country on earth.  Multicultural music played while parents and students toured through over twenty distinct displays fabricated by every grade at our school, in each of our three languages. 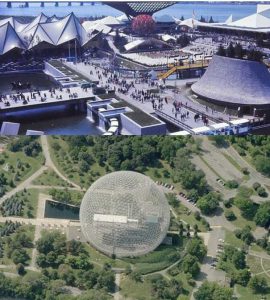 Expo ’67 in its glory days and today.

It took four years to conceive and construct Expo ’67; Akiva School assembled our Academic Fair in just under a year.  It took the efforts of every teacher, student, and specialist in the school to accomplish this unparalleled display worthy of our semicentennial year.

While gratitude abounds for all of those who constructed and contributed, I must extend a special thank-you to our STEAM team of Nick Roussos, Jake Stevens, Josee Gendron, Drew Rothman and Isabelle Silva for their vision, guidance, talent, and endless work in bringing every project to life and fruition.  Thank you to Debbie Abecassis for all of her work behind the scenes managing, coordinating and envisioning each element in this elaborate endeavor.  Thank you to Stacey Smilovitch who conceived of and lead the entire undertaking.  Thank you to all the teachers and staff for their incredible work guiding our students in their projects. Resounding congratulations to all. 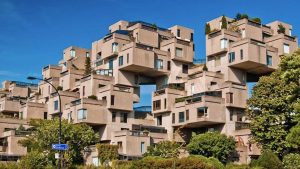 The stacked cells of Habitat ’67

On last weekend’s visit to the grounds of Expo ’67, I found the place mostly deserted; few of the breathtaking edifices still remain (though the modular cells of Moshe Safdie’s Habitat recalled to me the stacked boxes that constituted many of the showpieces of our Academic Fair).  World Fairs are meant to last only a short period of time before they are disassembled and abandoned. So too, by Wednesday at 10:00 pm, the last of our cardboard boxes and colourful murals had been hauled away, and the joyous bustle of curious onlookers had all gone home.

As we approach the end of the academic calendar, we are grateful for the opportunity to be part of Akiva during this brief and most special milestone year.  We hope to see you all again on June 5 for our celebratory evening, Late Night with Akiva, when we pay our final tribute to our 50th year.