The Call to God

The most ancient of all of the prayers for the High Holidays has a special connection to The Akiva School.  Avinu Malkeinu is almost 2,000 years old, yet its central words have remained unchanged.  Akiva’s founder, Rabbi David Hartman, z’’l, would have been proud.  Rabbi Hartman was a great innovator in Jewish education, and a progressive voice within Orthodox Judaism.  But for all of his transformative tendencies, Rabbi Hartman believed that the text of the Jewish prayers should remain unchanged, and that the same words of the liturgy should be chanted by all Jews. While others placed value in updating tefillot to be more relevant to, or consonant with, contemporary mores, Rabbi Hartman saw beauty and power in all of Israel speaking to God in a unified voice.  As I wrote in the introduction to the Akiva Kabbalat Shabbat siddur: “When all Jews use the same words to speak to God, we espouse a unified set of beliefs for the entire community, and prayer brings the Jewish people together.”

Tomb of Rabbi Akiva in Tiberias. A moral exemplar in death as in life, his martyrdom is recounted during the Yom Kippur service.

While the unaltered longevity of Avinu Malkeinu had the support of Akiva’s founder, the prayer has a deeper connection to our school, as it was written by our namesake, Rabbi Akiva himself.  The story of how the prayer came to be, how Rabbi Akiva composed it in a moment of inspiration, is told in the Talmud (Ta’anit 25b).

The tale takes place in a time of famine.  Drought was a constant concern in ancient Israel; the Torah teaches that when rain does not fall in its season, it is a signal from God that the Jewish people have sinned, and God is punishing us by withholding the fructifying heavenly waters.  The response is to pray to God for forgiveness, and if the rain returns, it is a sign that God has forgiven us.

The story begins with Rabbi Eliezer praying for the famine to end.  He leads the congregation in 24 separate benedictions, but to no avail; the rain does not fall.  Then his student, our eponymous Rabbi Akiva, takes over as the chazan.  He recites the following prayer:

Avinu Malkeinu!  Our Father, Our King, we have no other king besides You!

Avinu Malkeinu!  Our Father, Our King, have mercy upon us for Your own sake!

From the flow of the narrative, it appears that Rabbi Akiva had made this prayer up on the spot.  It is an original composition, though the images of God as father and king are taken from the prophet Isaiah: 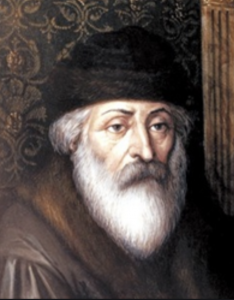 As soon as Rabbi Akiva uttered his Avinu Malkeinu prayer, the skies opened and the rain poured down upon the parched earth.  It is no wonder that our sages took this efficacious formula and made it part of the High Holiday liturgy.  And for the last two millennia Jews have recited Rabbi Akiva’s prayer in the hopes that our entreaties will be likewise answered with such Divine alacrity.   (As some of my students suggested this week, we can expand the meaning of the prayer from our Father our King to our Parent, our Sovereign.)

The story does not end there, however.  Following God’s miraculous response, the sages who were in the congregation of worshippers began to whisper to each other.  How is it, they asked, that the petitions of the master, Rabbi Eliezer, were not answered, but the prayers of his student, Rabbi Akiva, were fulfilled?

Suddenly, a voice from heaven called out to clarify this series of events.  The Voice explained:

“It is not a matter of which rabbi is greater than the other.  Rather, Rabbi Akiva’s prayers were answered because he himself is a forgiving person, whereas his master, Rabbi Eliezer is not.”

It appears, then, that there was nothing magical about the Avinu Malkeinu formula, rather it was the character of their author and performer that made an impact on God. At Akiva, we teach our students the ancient and indelible words of the tefillot as Rabbi Hartman suggested, and we also teach, through our Five Promises, that kindness and quality of character are determinative in living a Godly life.

This Yom Kippur, so many members of our people will not be able to attend synagogue and hear the tefillot recited by the chazan.  And of those staying home, many do not have the intricate skills needed to intone the complex liturgy for the Day of Atonement.  The heavenly Voice in our story offers comfort:  it is not the words recited, but the values of the person reciting them that have the power to move the Holy One blessed be He.

Rabbi Akiva is famous for the Avinu Malkeinu prayer, and he is also famous for being a leader among the group of rabbis who re-envisioned Judaism after the destruction of the Temple in Jerusalem.  At a time when we are reinventing so much in our lives and in the educational world, we are proud to have Rabbi Akiva and Rabbi Hartman to turn to as models of moral character, commitment to tradition and creativity, the core values of The Akiva School.