Third of an Ongoing Series

There is a terrible and frightening moment in parenting when your child first uses the “F” word.  Worst of all is when the object of the “F” word is you.  Here is how it plays out.  In response to either a statement or a situation that is anathema to the child, he or she responds by lobbing the “F” bomb: “That’s not FAIR.”  And there you have it, the “F” word, FAIR. 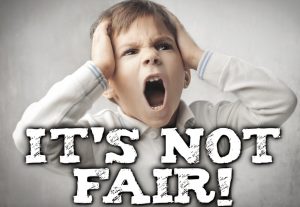 To my mind, “fair” is a far more troubling word than any other term beginning with the letter “f” that you might have imagined.  That is because the word “fair” is meant by children as an indictment of the world which we, as adults, have presented to them.  We rear our children to play fair, act fair, deal fairly with friends, and, generally, to be fair.  And yet, when confronted by our children with the “F” word, our response is often “Life is not fair.”  Understanding the contradictory messages in these exchanges is essential for implementing sound educational policy both at home and at school.

Current research suggests that we are born with an instinct to detect when something is not equitable, what is sometimes termed a “fairness gene.”  The theory developed as an outgrowth of a behavioural economics study done in 1982.  Here is an outline of the experiment:

Two people are asked to split an amount of money.  Person A is given a sum of money and told to make a proposition to Person B to divide the money.  He can offer the other person 50% of the money, 40% of the money, or as little as 10% or 5% of the money.  If the second person accepts, they both keep the agreed percentage, and both make off with a nice amount of cash they did not have before, a win-win.  If the second person rejects the offer, they both get nothing, a lose-lose.

Technically, the second person should accept any amount she was offered: whatever it is, it is more than she had before, and if she rejects it, both get nothing.

But that is not how the second person reacts.  In most cases, if Person B is offered less than 30%, she would rather walk away and get nothing.  Why?  Because it is not fair that the other person should keep so much; the division is not equitable.  It appears, then, that we are wired to value fairness even over rational self-interest.

When children say “That’s not fair” they are acting on their instinct that the world should work according to the principle of equity.  When we respond, “Life is not fair,” we are educating our children that the reality of the world is in tension with how we are wired to believe the world should be.  As adults, we know that life is, in fact, not fair: good people get terrible diseases, millions are born into poverty, and natural disasters strike the wicked and righteous alike.  In fact, more often than not, our children benefit from the fact that life is not fair: it is not fair that they were born into a family with loving parents or that they live in a free and prosperous country.  Many children do not have these blessings, which is not fair.  But children seldom protest when fairness is in their favour.

When educating about fairness, it is important to balance these paradoxical elements.  On the one hand, we must encourage and nurture our children’s instinct to believe the world should be fair, and at the same time lead them to understand that the world in which we live does not reflect this ideal.  Optimally, this will inspire them to dedicate their lives to making the world as fair as possible with what is in their power.  Life may not treat everyone fairly, but we can.

Next time, I will look at how this fairness paradox plays out in school policy.