The show must go on…

With Chanukkah’s departure, we have the opportunity to take a more nuanced look at the intersection between Jewish and Greek culture.  While Chanukkah offers a binary view of Hellenism as antithetical to Biblical and Rabbinic values, the reality is more complex.  Our sages certainly rejected major elements of Greek life—polytheism and the veneration of the physical body—but they also embraced many aspects of Greek philosophy, leadership structures, language, and popular culture.  Since the time of the Maccabees, Judaism has continued to accept, reject, adopt, and adapt aspects of Classical culture so that today, many concepts that were once considered Greek are now thought of as Jewish.

Modern theater originated in ancient Athens, the epicenter of Classical Greek culture. Like many other things Greek, Jews were initially reluctant to embrace the stage.  While Judaism never espoused the full-blown anti-theatricality that was common in Christianity, the ecclesiastical concerns were similar.  Both religious groups were fearful that plays were frivolous, involved forbidden cross-dressing, and were a form of falsehood, since actors pretended to be people they were not.  For Jews, this type of lighthearted and even antinomian entertainment could not be part of everyday life.  But it was perfect for one day a year—Purim.  And so it was that the first genre of Jewish play was the Purim spiel, the Purim play. 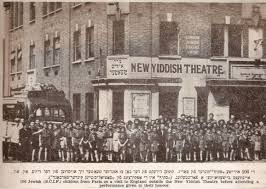 Today, drama is one of the hallmarks of Jewish culture.  From the Yiddish theater of the 19th century to 20th century Broadway to the countless great Jewish playwrights like Arthur Miller and David Mamet, Jews have embraced this ancient Greek creation as our very own.

Akiva School welcomes the intersection between traditional Judaism and secular society, so it is natural that we celebrate the creative energy that bursts forth when Jewish values are incorporated into the Greek cultural contribution of live theater.  The Akiva Play, The Greatest Puppet Show, which premiered last night, is a shining example of the greatness that comes from the meeting of Athens and Jerusalem.  Coming between the holiday of Chanukkah, where we encounter Greek ideas, and Purim, when we first began to perform on stage, the Akiva play is perfectly positioned in the calendar.

There are other combinations of two disparate pieces that characterize this year’s Akiva Play.  The Greatest Puppet Show is a delightful blending of two stories, the 2017 American film, The Greatest Showman, and the 1883 tale, The Adventures of Pinoccio, by Italian writer Carlo Collodi.  The show involves both parents and students; it is produced by current and former Akiva students and staff; it includes general and Jewish themes and values.