Deborah Abecassis Warshawsky.  An Akiva parent, Debbie has an MA and PhD in the history of Jewish Bible Interpretation from McGill University as well as a Masters in Library and Information Science (MLIS) also from McGill. 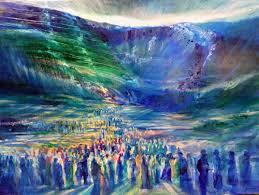 I implemented a new rule in my house for 2016.  Maybe I should say – I am trying to amend an existing chore.  Rather than just remove their plates from the table after a meal (this is the existing rule, with which at least 2 out of 3 will comply at every meal, and not always the same 2), I’ve asked my girls to scrape any leftovers into the compost and put their plates AND cutlery AND glass in the dishwasher.

I don’t have to tell you it is neither complicated nor time-consuming.  Sometimes my little one cannot reach the opening of the compost bag if it is sitting on the counter, but she is the one most likely to drag over a step stool.  “I got it,” she says to me when I try and take her plate from her to help.

So after every meal, as they head off to do homework or put their coats on to leave for school, I am left with the internal struggle of whether to call them back to put their dishes in the dishwasher or take the “easy way” and do it myself?  How often must I police “also the glass, please?”  How much longer do I need to ignore – calmly and with a smile – the looks and the rolled eyes and the excuses and the moans and the whining as I try and implement change?

In this week’s parashah, the Israelites finally leave Egypt:

“It happened when Pharaoh sent the people that God did not lead them by way of the land of the Philistines, although it was near, for God said, ‘Perhaps the people will reconsider when they see a war and they will return to Egypt.’ So God took the people around toward the way of the wilderness to the Sea of Reeds.”

According to Ibn Ezra, the direct route from Egypt to the land of Israel – “by way of the land of the Philistines” was no more than a ten-day trek.  Instead, God took them the long way – “by way of the wilderness to the Sea of Reeds” – and as we know, they wandered through the desert for 40 years.

Forty years versus ten days sure gives new meaning to “the long way.”

The verse itself seems to explain why God chose to take them this way.  The short cut kept the people too close to Egypt and when they saw war, they would be tempted to turn back.  However, even on the long route, the Israelites face battle and many hardships.

“Is it because there are not enough graves in Egypt that you took us to die in the wilderness? What is it that you have done to us to take us out of Egypt?”

Only now as a parent do I read this line with the voice of a snarky teenager, and I both laugh and cringe at the audacity.  The verse is meant to show us the Israelites’ struggle with faith in God – that through Moses, He will protect them.  But there’s a reason, I believe, that the Torah refers to the Israelites as “the Children of Israel.”  Slaves, like children, never have to be responsible for their own welfare or sustenance. And like children, emancipated slaves need to be taught how to take responsibility for themselves.

Further on, they complain to Moses again:

“If only we would have died by the hand of the Lord in the land of Egypt, as we sat by the pot of meat, when we ate bread to satiety, for you took us out to this wilderness to kill this entire congregation by famine.”

Again, as a parent, I read in this the melodrama of an over-indulged child.  The rabbis disagree whether the Israelites speak the truth in this complaint – that they had access to as much food as they wanted – or whether they are reflecting on their past with “rose-coloured glasses.”  Either way, as slaves, they were free from the burden of independence, and now, as they sit in the desert without knowing when or where they will find food to eat or water to drink, they mask their insecurity with aggression towards their leader; they blame Moses.

Moses has a difficult time bearing the brunt of the Israelites’ agitation, and turns to God.  After yet another complaint about the lack of water, Moses cries out to God, “What shall I do for this people? A bit more and they will stone me?”

God teaches Moses how to show the Israelites that faith in the plan means continuing to journey forward despite the hardships they encounter.  At the edge of the Sea of Reeds, with the Egyptians closing in, God says to Moses, “Why do you cry out to me? Speak to the Children of Israel and let them journey!”  In other words, God tells Moses to trust in God and the journey to freedom.  There is no benefit to stop and bemoan what is scary and difficult – they must only move forward and have faith that God will remove the obstacles (like a body of water) in their way.

They took the long road – because turning back was not an option.

God chose this way because He knew the people needed time to learn how to be independent, to adjust to life as free people and not slaves, and to appreciate the power and responsibility they have for their own survival.  They needed time to grow up.  And in the meantime, Moses had to learn how to face their whining and eye-rolling and grumbling.

The easy way – the shorter way, the faster way, the way with less conflict – would be to continue to load my children’s dishes into the dishwasher.  But we know as parents that the easy way is not how our children will learn to be independent and responsible.  The grumbling comes along with the growing.  Much change is met with resistance.

If I want them to put their dishes in the dishwasher, I will have to persist.  It’s been longer than ten days.  Let’s hope it doesn’t take 40 years.