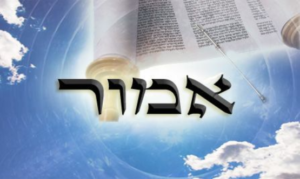 Do you ever feel like the words you impart to your children hang in the air above them, never quite penetrating their brains (and conscience)?  I imagine them hanging there, floating like a balloon that slowly sinks to the ground as it deflates.

And then trampled on as the children run out the door.

This week’s parashah is called Emor – Say – and the first verse opens with:

The Lord said to Moses: Say to the Kohanim, the sons of Aaron, and you shall say to them.

Rashi asks what are we to learn from the repeated use of the word “say.”   When God commands Moses to speak to the Kohanim, what purpose does the added instruction “and you shall say to them” serve?

We learn that the second use of say is the direct address that Moses is to make to Aaron’s sons, but the third is an injunction for Aaron’s sons to speak to the generations that will follow.  In other words, as parents and adults we monitor (or say to ourselves) what and how our own behaviours and expectations should manifest Jewish observances and traditions and values – we are responsible for the expression of our Jewishness.

However, “and you shall say to them” – teaches us that we are also responsible for how we “say it,” how we express and demonstrate and observe our Jewishness for our children – in a way that they will truly hear it and take it in.  From the ultimate cliché, “Do as I say, not as I do,” the Torah directs us here to align our words and our actions, so the essential message of Jewish continuity is received without ambiguity, (lest it be trampled and abandoned as a deflated balloon.)

In a story told towards the end of the parashah, a man blasphemes and pronounces the name of God.  The community brings him to Moses and God commands Moses to remove the blasphemer from camp and to instruct the community to stone him to death – which they do.  The text identifies this man in terms of his parentage – he is called “the son of an Israelite woman,” and apparently among the Israelites there was a disagreement as to whether his father was Egyptian or Israelite.

When he is brought before Moses, the name of the mother is recorded: Shelomit the daughter of Dibri of the tribe of Dan.

If we consider this story on its own, it is fair to ask whether the focus on the identification of this man’s parents implies that the responsibility for his fatal sin lies with his upbringing by parents of “questionable” heritage or specifically with his mother whose name (among so many unnamed females in the Bible) is recorded for posterity.

When we juxtapose this story with the injunction at the beginning of the parshah for parents to teach their children the Torah’s commandments and what it means to be Jewish, we are left with the very weighty question of with whom lies the responsibility when progeny makes poor choices.

If we are commanded to teach our children in a way that they understand, and they behave in ways counter to our words, is the failure ours or theirs?

The answer, I believe, lies in the story of the blasphemer.  While there is an implication that his parents may have contributed to the behavior, it is never confirmed or stated outright.  The community takes responsibility for him, and he himself alone, ultimately, faces the consequences of his behaviour.

As a community, all of us together are responsible for the continuity of our traditions and heritage.  But at the same time, as individuals, we are each responsible for our role in perpetuating a connection to Jewish life.  When one hasn’t learned from the parents and adults in his/her world, then clearly it is up to the individual to seek that knowledge on one’s own.

At some point, you are responsible to notice the balloon and decide whether or not you will take it with you as you continue learning, growing and sharing.