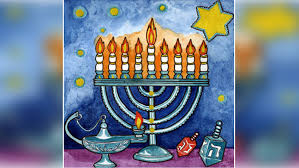 Let’s start with an exegetical question of an ambiguous text.

(Translation: Is the meaning of the following phrase clear, or could there be multiple interpretations?)

“Hanukkah is the festival of lights.  Instead of one day of presents, we get 8 crazy nights.” – Adam Sandler.

Is our erudite Reb Sandler saying Hanukkah is about eight nights of presents, given that he has juxtaposed “one day of presents” with “eight crazy nights?” Or does “crazy” take on a more broad interpretation, encompassing all the rituals and traditions and (fried) food in which we get to indulge – not just for one day, but for more than a week?

And I won’t make any assumptions about the depth of meaning Reb Sandler ascribed to his ballad – currently in four parts.  (But I suspect the prime motivation of the line is that the number of syllables just fits.)

The theme of presents and Hanukkah is a big one this week.  In media.  In my house.  Probably in your house as well.  We’ve never had any set, specific rules about presents.  We don’t buy one big present or eight small presents.  We don’t do the same thing every single year.  We try and keep expectations low and change (keep?) the focus to the holiday’s meanings, the lights of the hanukiyah, celebrating with family and giving instead of receiving.

I think I’ve mentioned my daughters’ eye-rolling before…

It is a struggle to fight against the tide of wish-lists and schoolyard reports of who got what, requests from well-meaning relatives for gift ideas and the sheer amount of stock in the stores.  It seems like the earlier it gets dark outside, the greater the pressure to buy and the greater our children’s expectations that they will receive.

I’m no Hanukkah grinch – I love to buy my girls surprises – but I feel the need to acknowledge that it has everything to do with a secular “season of gift giving” and nothing to do with the fundamental roots of the holiday of Hanukkah.  When Christmas became a national holiday in America in the late-19th century, and as the (North) American consumption of material goods continues to grow and expand, so too did gift giving become linked to Hanukkah.

In the words of Seinfeld: “Not that there’s anything wrong with that;” it only adds to the fun and festivity.

In this week’s parashah, one that usually falls during the holiday of Hanukkah, Joseph’s brothers go down to Egypt during a famine to get food from Pharaoh’s storehouses.

“Joseph saw his brothers and he recognized them, but he acted like a stranger toward them and spoke with them harshly… Joseph recognized his brothers but they did not recognize him.”

Joseph accuses his brothers of being spies and insists that they must leave one brother in Egypt while they return to Canaan to bring their youngest brother Benjamin to him – in order to prove that they are not spies.  The brothers spend three days in prison considering their options and ultimately, realizing they are suffering because of the suffering they caused Joseph so many years before, leave their brother Simeon behind and return to their father in Canaan.

Joseph has his men fill their bags with grain and provide them with food for the journey, and he also hides the money they paid him in their sacks.  They return to their father, Jacob, and tell him what transpired in Egypt.

“So it happened: They were emptying their sacks, and behold! – every man’s bundle of money was in his sack; and they saw their bundles of money, they and their father, and they were terrified.”

Jacob refuses to let the brothers bring Benjamin to Egypt, but when the provisions run out and the famine persists, Judah persuades his father that taking Benjamin is the only way for the family to survive.  Jacob agrees but insists that they bring Joseph gifts:

“Take of the land’s glory in your vessels and bring it down to the man as a tribute – a bit of balsam, a bit of honey, wax, lotus, pistachios and almonds.  And take double money in your hand, and the money that was returned in the mouth of your saddlebags return in your hands; perhaps it was an oversight.”

Joseph sees his brothers arrive in Egypt and has his men bring them to his house for a meal.  When Joseph notices Benjamin he becomes so emotional that he rushes from the room and weeps.  Then “he washed his face and went out, and restrained himself and said, ‘Set out bread.’”

Rashi explains “and he restrained himself” means he strengthened himself or put forth effort upon himself.  In other words, he took a moment to get himself under control.

After dining with his brothers, he once again instructs his men to fill the brothers’ bags with food and hide their money therein.  In addition, he commands them to put his silver goblet in Benjamin’s sack.  He chases after the brothers, accuses them of stealing the goblet and “finds” it in Benjamin’s bag.  The parashah ends with Joseph telling the brothers they may return to their father, but that Benjamin must remain with him as his slave.

Many commentators have asked why Joseph did not reveal himself to his brothers right away; why he played these games with them, hiding money and the goblet in their bags, adding worry and stress to them and their father. Does his emotional restraint reveal an element of immaturity – that he uses his position of leadership to exert revenge for the way his brothers treated him?  Was he incapable of separating his personal demons from the job Pharaoh had given him?  Or rather, does this emotional restraint show enormous strength of character and maturity, that he put aside his personal feelings to provide the brothers with an opportunity to repent for how they treated Joseph?

As the parashah ends, we are left to wonder whether the brothers will abandon Benjamin, hating another son of Rachel as they did Joseph, or whether they have learned and grown.  According to Abarbanel, Joseph’s emotional restraint allowed him to further God’s greater plan of establishing Jacob’s sons as the foundation of the Jewish people.  For this to occur, the brothers needed to see and understand that they were no longer the same men who allowed their brother to be sold into slavery.

Restraint is a theme that fits well with the holiday of Hanukkah.  A custom first mentioned in the 14th century says that women are to abstain from any work while the Hanukkah candles are burning – light the candles and restrain yourself from doing anything; just sit and enjoy the glow until they burn out.  (I keep meaning to adopt this custom.  Maybe by the eighth night, I’ll be successful).

Whether we think about latkes, doughnuts and chocolate, or eight nights of gifts, we see from Joseph that it is important to take a step away – from the table, from the shopping, from our regular responsibilities – refresh ourselves, and re-evaluate what we are feeding our children’s stomachs and spirits, and our own.

The origin of Hanukkah gelt – much older (and dare I say more authentic) than Hanukkah gifts – encapsulates the values of the holiday I cherish the most.  Some believe coins are a symbol of the independence the Maccabean battles restored, allowing the ancient Jews to mint their own coins.  But others say Hanukkah gelt originated in Europe where students gave money to their teachers during the holiday because they were prohibited from accepting payment for teaching Torah.  An etymological link between the Hebrew words “Hanukkah” (dedication) and hinnukh (education) may have been its source of inspiration.

Amidst the parties, the (fried) food, and the gifts, the lights of the hanukiya illuminate the stories and lessons of our history.  They also compel us to remove ourselves – even for a moment, even just for the time it takes the candles to burn – from what the world tells us is crucial and instantaneously important, from what we usually do and think and say.  We step back so that we can recognize, remember, and reflect on what we are teaching our children, what we and our children are learning and whether we are all growing.  They don’t sell these gifts at Toys r Us.

And their batteries never die.