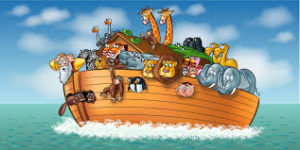 This week’s parashah is the story of Noah and the ark. God tells Noah he is going to destroy the earth because the people are corrupt and He gives Noah very specific instructions and measurements so he can build an ark for himself and his family and two of every animal. After it rains for 40 days and nights, Noah sends out a raven and then a dove to search for dry land. The dove returns with an olive branch and God shows Noah a rainbow as a symbol of the promise He makes never to destroy the world again.

The biblical story lends itself to many retellings as one imagines what it must have been like for Noah and his family to live on a boat filled with animals.

One of my favourite storybooks about Noah is an Israeli folktale adapted by Warren Ludwig and called, “Old Noah’s Elephants.” On the opening page, Noah’s wife comes to find Noah on the deck of the ark, standing in the rain under an umbrella. She tells Noah that he better check on the elephants. As Noah hurries through the ark in search of the elephants, we get a sense of the chaos he is managing every day. The illustrations show different kinds of animals all mixed together in the open spaces of the ark.

Between feeding the animals and soothing ruffled feathers, Noah’s family was busy all the time. There was always something that needed attention.

Noah finds the elephants in the food supplies, munching away, and he reassures his wife he will take care of it so they don’t eat everything in sight. First Noah tries asking the elephants politely if they would please return to their rooms and wait for feeding times. They ignore him and keep on eating. Then he states a bit more firmly that they must move immediately. They continue to eat. Noah tries to push them so they move, but the harder he pushes, the faster the elephants eat and the fatter they become. When Noah sits down to rest and think of another strategy, he realizes there is a bigger problem. As the elephants are growing fatter, the ark is starting to tip. If he cannot move the elephants, everyone on board will drown!

Noah runs outside to pray to God, and God responds with the following instruction: Tickle the Hyena! Noah is confused. “What?” he answers. God repeats, “Tickle the Hyena. Trust me.” Noah figures what has he got to lose. He tickles the hyena on the nose with a feather, who in laughing rolls onto the lion’s tail whose subsequent roar scares the giraffe who jumps and knocks the sleeping monkey onto the zebra’s back. Each animal’s reaction contributes to a chain of events that ultimately lands a mouse in the basket of vegetables from which the elephants are eating. The mouse lets out a squeak as one elephant grabs a head of cabbage. Terrified, the elephants drop what they are eating and run to opposite ends of the ark. Problem solved. Everyone is safe.

The story builds on the biblical themes of trust and faith in God and the belief that events occur for a reason, even if we cannot see, understand or anticipate the sequence from which they occur. It also alludes to the idea that escaping into the ark from the flood waters outside does not mean that Noah did not still feel like he was drowning. We all have moments of feeling overwhelmed, of wishing we had an ark with which to escape the flooding in our lives.

In the Bible, God tells Noah to make a “Tzohar” in his construction of the ark. This is the only time this word appears in the Bible. Rashi explains that it is either a window through which light shone or a precious stone from which light emanated. We learn from this that in any dark situation, there is always hope. Sometimes this light comes from the outside and we need to find or create its source. Other times, this light comes from within, and we must be the ones to offer hope and shine for those around us.

Children can relate to this story on many levels. Here are a few discussion questions for your Shabbat Table:

1. Do you think it was really necessary for God to spring the flood across the earth?
2. Why were the measurements and requirements for the ark so specific?
3. Why does God repeat all of the instructions? Don’t you think Noah understood the directions enough the first time around?
4. What does it mean to you that God promised that the world would never be destroyed again?
5. What do you think of when you see a rainbow?
6. What do you think Noah’s biggest challenges were on the ark for 40 days?
7. Is it sometimes important to listen to what someone tells you to do even if you don’t agree or don’t understand why?
8. How do you think Noah felt about all the people and animals he couldn’t take on the ark?
Shabbat Shalom.