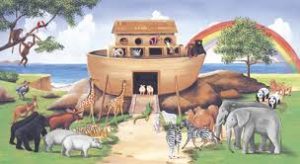 My youngest daughter was discussing with her sisters possibilities for the catchphrase of kindness she would try and use more often this month as part of Akiva School’s Derekh Eretz program.  She had some good ideas – don’t give up, I’ll help, thank you – all phrases that would fill the buckets of the people in her world.

My middle daughter had not yet been assigned this mitzvah mission for the month and she and my eldest started making up ridiculous proverbs and imagining different conversations in which they could respond with snark and silliness.

They were confusing (probably purposefully) the idea of a saying with a catchphrase and latching onto the idea of using a personal motto as a frequent response.  In a typically adolescent way, they were turning something positive into something worthy of mockery.

BUT, the two older sisters were doing it together.  They were getting along, laughing, enjoying each other’s wit and in a (teenage) way, playing nicely.

Towards the end of this week’s parashah – Noah – in which we have the well-known story of the Flood and the ark, is the narrative of the Tower of Babel.  Here, the people of the land decide to build a tower:

And they said, “Come, let us build us a city, and a tower with its top in the heavens, and let us make a name for ourselves, lest we be dispersed across the whole earth.”

The goal of their actions was to subvert God’s authority and circumvent any decrees He may enforce.  God sees what they are planning and goes to:

[C]onfuse their language, that they should not understand one another’s language. And the Lord dispersed them from there over the face of the earth; and they stopped building the city.

Rashi asks a very interesting question: We are told in the flood story that in that generation:

In response to corruption and robbery, God destroyed the whole world with a flood, but in response to people actually attacking God directly, building a tower into His space in order to sabotage His plans, He disperses them throughout the world.

Rashi questions why the sin against God directly did not merit the greater consequence.

The answer, he suggests, lies in the opening verse to the narrative:

The whole earth was of one language and of unified words.

When God looked down and saw the tower that the people of the land were planning and building, He noticed first that they were working together and getting along peacefully, in harmony and unity.  This positive quality of their actions merited a moment of pause and, dare we say, naches.

The generation of the Flood as robbers were hostile towards and distrustful of each other.  As Rashi said, “That is why they were obliterated.”  God may not have liked what the people of the Tower were doing, but He liked how they were doing it, and therefore their consequences were not as severe.

God shows us through His actions that behaving with love and friendship and peace among us is preferable to hatred and conflict.

And so while I continued the conversation quietly with my youngest daughter, I let the older two prolong their antics for a bit, enjoy each other’s contribution to the mirth and hilarity and (hopefully) strengthen their sisterly bond.

But then it was enough.  I asked them to stop.  To their (mostly deaf) ears I tried to re-direct them to the actual goal and merit of the mission, and then, I sent them off to do their homework – in separate rooms.

Talk to your children about the power of the words we use.  It’s not just about what we say, but how and when we say them that can have such positive and negative impacts on the people around us.

But mostly, it’s about the relationships and connections we make with the people in our world.  Words are an important tool for strengthening these connections.

And sometimes we need to allow space for the connections to solidify in silliness and laughter.