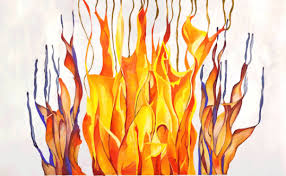 They were 2 1/2 and 1 years old. The younger of the two was of more solid build, stronger, and not much smaller in size than the older. And she loved her big sister fiercely.

One day, in this spirit of love and fun, she climbed onto her older sister and hugged her tightly. And she would not let go when the older sister, more reserved and cautious, used her words and asked her to stop. So the older sister, unable to release her arms and feeling increasingly trapped, bit the younger sister.

The younger sister screamed. There were teeth marks. If there was blood, I’ve blocked it out.

The consequences for the older sister were swift and immediate. She was shocked both by the unambiguous, unnegotiable removal of a routine and expected privilege, and by my austere reaction to something she had done instinctively to save herself and not malevolently against her sister.

She had no warning to the likes of, “next time you bite your sister…,” no possibility for chances. The message was explicit and absolute. Biting is unacceptable.

In this week’s parashah, Shemini, Aaron and his sons begin to officiate as priests (Kohanim) in the Mishkan. As they offer sacrifices as part of the service, a fire descends from the heavens and consumes the offerings on the altar, revealing God’s presence in this sacred space. However, amidst the exalted fervor, tragedy strikes:

The sons of Aaron, Nadav and Avihu, each took his fire-pan, they put fire in them and placed incense upon it; and they brought before the Lord foreign fire, which He had not commanded them.  And fire went forth from before the Lord and consumed them, and they died before the Lord.

In the midst of the sacrificial ceremony and ritual, Aaron’s sons bring fire and incense before God and are killed immediately by Divine fire.  They are given no warning, and as the commentators show us, the nature of their transgression is not clear.  Was the problem that they offered foreign fire?  Or that they were not commanded to offer this particular sacrifice? Or that they were commanded specifically not to offer this sacrifice?

References to the incident further on in the Torah do not offer clarification.

Later in the book of Leviticus we are told:

And the Lord spoke to Moses after the death of the two sons of Aaron, when they came near before the Lord, and died.

According to the book of Numbers, Nadav and Avihu died when they offered strange fire before the Lord.

This was the first time Nadav and Avihu were performing the sacrificial rites.  Is it not understandable that they may have erred in the details, and if the reason for which they were killed immediately and without warning is unclear, how are we to learn from this error?

In the midrash, the rabbis describe that Nadav and Avihu were so overwhelmed by the joy and intense religious fervor of the moment, that they wanted to “redouble their love,” or show how devoted they were to God by doing even more.

The Biur, an 18th century German translation and commentary on the Torah compiled by Moses Mendelssohn, explains further that Aaron’s sons did not transgress a particular commandment.  Rather their sin stemmed from the absence of discipline and humility.

Men of exalted saintliness, such as Nadav and Avihu should have been more modest… They should have dreaded entering the Sanctuary unless summoned and avoided bringing a fire offering of their own initiative.

If the goal of the Torah is to guide the people in complete devotion to God, then spontaneous displays of passion guided by the heart contradict submission to God through the structure of the Torah’s precepts.

Their unforgivable sin was losing themselves in the moment and forgetting the respect and honour one shows a superior through modesty and obedience.   Adding sacrifices, performing rites that were not commanded – even from love and not defiance – was a form of heresy, and thus, their punishment was swift and immediate and fatal.

With some behaviours, there is no room for feelings or intention – only deference and compliance.  And sometimes warnings devalue the lesson in differentiating between an absolute right from an absolute wrong.

If you will only have a consequence next time you behave this way, does that make this time somewhat okay?

The older sister did not bite her younger sister again, but I was lucky.  Sometimes these instinctual reactions are much harder to deter and restrain.    On first read, Nadav and Avihu’s punishment may seem unnecessarily severe – death for acting on their passion for God.  We learn, however, that there is a line between right and wrong, and how we react to one who crosses that line reflects our true commitment to principles, virtues and standards of appropriate and acceptable conduct.

Even (especially?) when the “transgressors” are beyond adorable.

Even (especially?) when all we feel is tremendous, heart-aching love and compassion.