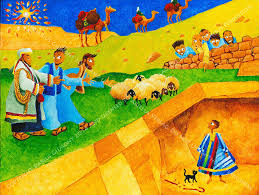 We’ve all laughed at the infamous adage: do as I say not as I do.  Whether we’re telling our children to put down their electronic devices as we answer an email and text a friend, or insist they eat dinner before dessert as we brush away the crumbs from cookies we nibbled while preparing the meal, we’ve all broken the rules we try and insist our children follow.

This week’s parashah begins the Joseph narrative in which we read of Jacob’s favouritism for this son Joseph, Joseph’s dreams that he will one day rule over his family, his brothers’ jealousy and plans to kill him, and Joseph’s time in an Egyptian jail in which he interprets the dreams of Pharaoh’s baker and cupbearer.

Jacob gives Joseph a special coat and the text tells us: His brothers saw that it was he whom their father loved most of all his brothers so they hated him; and they were not able to speak to him peaceably.

Sibling rivalry was something Jacob knew well.  His own father favoured his brother Esau, and his wives Leah and Rachel also shared many tense interactions.  One might expect Jacob to be more sensitive to his sons’ feelings and not exacerbate the rivalry between them.

When Jacob hears the dreams Joseph is relaying, he scolds his son saying: “What is this dream that you have dreamt? Are we to come – I and your mother and your brothers – to bow down to you on the ground?”  However, he does not say anything in front of the other brothers: So his brothers were jealous of him but his father waited on the matter.

The story that follows is well known.  Jacob sends Joseph to check on his brothers shepherding sheep in the field.  When they see him coming, they plot to kill him, but on Reuben’s leadership they choose instead to throw him into a pit, and he is sold down to Egypt.  The brothers dip his treasured coat in blood and bring it back to Jacob for him to assume that Joseph has been killed by an animal.

Having experienced the toxic effects of sibling rivalry himself, could Jacob not have prevented the suffering he endures for years until reunited with Joseph?  Why did he not shower his other sons with love and attention or try to mitigate their jealousy by curtailing his obvious favoritism for Joseph?

On Kindness Day this week at Akiva, we talked about the power of inclusion and how everyone deserves to feel valued and important.  We talked about treating others as we wish to be treated and helping to make sure that no one ever feels left out.

And it is our responsibility to lead by example.