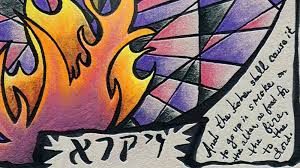 This week’s D’var Torah is brought to us by Deborah Gettes, a consultant for special needs education for the Auerbach Central Agency for Jewish Education of Greater Philadelphia.

Understanding the concept of korbanot gives us concrete ways to live our lives. To the Israelites, the Temple was the place where God resided. Making offerings at the Temple was their way to get closer to God. Certainly the sacrifices were not easy to make. The animals had to be slaughtered in severe and brutal ways. Ripping limbs, pinching off heads, tearing animals open, dashing blood against the altar, and dipping fingers into blood don’t sound like pleasant activities. Although it is not possible to make sacrifices at the Temple today, that doesn’t exclude us from having to put forth an effort to bring ourselves closer to God-making our own korbanot. We can draw closer to God if we act in a godlike way. Our practice of benevolence is shown through kindness, compassion, generosity, and goodwill for the earth and its inhabitants.

In the movie Pay It Forward, the boy, Trevor, seeks to have a positive impact on the world by doing unsolicited good deeds for people and asks only that they repay him by doing the same for three others. When one of his recipients says that is not easy, Trevor replies, “It is not supposed to be easy.” Trevor is acting in a benevolent way and is encouraging others to behave in the same manner.

The study of Torah and prayer are other means that bring us closer to God. They allow us to act in a godlike way.

In his famous book Guide for the Perplexed, Moses Maimonides argues that sacrifices were an early form of worship given to the Jewish people so that they could learn how to serve God without feeling different from all other peoples surrounding them. Slowly, Maimonides says, the people learned that “the sacrificial service is not the primary objective of the commandments but that prayer is a better means of obtaining nearness to God.” Agreeing with the early Rabbis, Maimonides emphasizes that the superiority of prayer is that “it can be offered everywhere and by every person.” ( A Torah Commentary for Our Times, UAHC Press, 1990, p. 100)

As we conclude our study of Parashat Vayikra, we need to know what our present-day korbanot should consist of. Certainly all forms of tzedakah and the following of mitzvot are essential. Studying Torah and attending prayer services also move us to the closer connection with God that we so desire. Whether we have sinned or not, whether we have done so intentionally or unintentionally, we still have the desire to move closer to God, to offer our own korbanot. To do so, we must put forth the effort to show kindness, compassion, generosity, and goodwill even if that is not easy. At the same time, we must put forth the effort to study Torah and attend worship services. As Pirkei Avot states, Mitzvah goreret mitzvah : The more good we do, the more good we do. This is really a model for life. Sacrifices are alive and well: They just have to be slightly redefined.