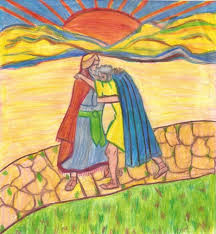 As our Akiva players begin their first performances of The Magic Lamp, they are full of excitement and nervous energy.  Over the last few months, they have studied their lines, memorized their cues and rehearsed their dances – they have all worked so hard – but everyone can understand and appreciate the apprehension of being on stage in front of an audience.

In this week’s parashah, when Jacob hears that he is about to meet up with his brother Esau for the first time since he deceived him and took their father’s blessing meant for the eldest, the text tells us:

And Jacob became very frightened and it distressed him.

Many commentators were surprised at this reaction.  God told Jacob in the last parashah:

Behold I am with you; and I will guard you wherever you go, and I will return you to this soil; for I will not forsake you until I will have done what I have spoken for you.

They wondered whether Jacob’s fear demonstrated a lack of faith in God’s protection.  He heard from God himself that he will be protected and that God’s promise will be fulfilled through him – of what then did he have to be afraid?

The rabbis explained that a truly righteous man understands that even a promise of Divine protection is conditional on one’s future actions.

Such is the character of pious men, though the Holy One blessed be He promises them His protection, they do not throw off fear.  So it is written with regard to Jacob: ‘Then Jacob became very frightened.’ Why was he afraid? Peradventure I strayed in some way while with Laban… and the Holy One then has left me. (Tanhuma)

Jacob’s fear of Esau was not due to the weakness of his faith.  Indeed, he truly trusted in God.  Rather, his fear was like that of a real hero who in going out to battle is afraid of death and is aware of the danger, but out of noble motives, scorns life and chooses a brave death…

Jacob’s fear demonstrates that he genuinely appreciated the degree of Esau’s hatred towards him and thus this was a natural reaction, but as a real hero – a man of character – he steeled himself against this fear and prepared himself and his family for the encounter with his brother.

The commentators show us through the description of Jacob’s state of mind that true courage and strength of character is evident when we persist in spite of stress or fear.

Our Akiva players have no reason to be nervous.  They have studied and practiced and they know what they need to do.  Their apprehension shows us that they genuinely understand what is expected from them on the stage, the degree to which they must “perform.” As they sing and dance and act and smile in each performance, they also show us how brave and strong of character they are.

And we are all so very proud of them.