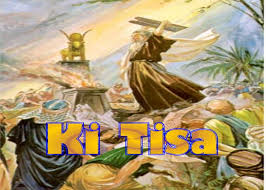 This week, we have a guest blogger, Akiva parent Dr. Michael Kalin, with an inspirational D’var Torah on Parashat Ki Tisa.

Thank you Michael for sharing.

We are all familiar with the story of the golden calf in Ki Tisa.  Moshe ascends Mt. Sinai to receive the Torah from God, and the people of Israel grow restless while they wait.  Feeling abandoned, mere days after hearing God’s voice and months after the miracles of Exodus, the people demand of Aharon to make “gods that will go before us” for “this man” (Moshe) has disappeared.

Perhaps shockingly, Aharon agrees.   The “entire” people remove the gold from their bodies and craft a golden calf – the “god” they proclaim that “brought us up from the land of Egypt.”

What follows is fascinating – an elaborate verbal chess match between God and Moshe.  God places the blame on “your” (Moshe’s) people then “the” people before Moshe pleads for “God’s” people.  Remarkably, God atones for the “evil” remark – and despite Moshe’s decision to subsequently destroy the tablets – invites Moshe to receive a second set of commandments.

Ki Tisa is an amazing story of disappointment, fear, betrayal, loyalty, redemption, leadership and vindication.  We see Moshe at his finest – a leader of the people and for the people.

However, amidst all the action of the Parsha, I often wonder – what was the sin?  Lack of faith in God?  Aharon’s seemingly quick capitulation?   Creation of an idol?  The people’s “disposition” towards evil?  Destruction of the tablets?

I am always fascinated by the image of Moshe descending the mountain, holding the tablets, anticipating what he is about to witness.  We all know what happens next – Moshe dramatically throws them down and “shattered them at the foot of the mountain.”  But why did he break them? Certainly not out of surprise.  After all, moments earlier, Moshe was warned of the sin and still he emphatically pleaded to save the people.  Some commentators suggest that Moshe was shocked by the sight of the people singing and dancing around the golden calf – and either the tablets slipped (because of weakness) or were crashed (out of rage).  I believe, however, another explanation better fits Moshe’s character.

When Moshe finally confronts Aharon, Moshe proclaims “Whoever is for Hashem, join me!”  The Levites gather, a fierce and bloody “cleansing” follows and three thousand men are slain.

Put in context, there were over six hundred thousand men at Mount Sinai for the Revelation.  Calculating in women and children, well over a million people had gathered for this pinnacle event.  Yet only three thousand men die for the sin of the golden calf – less than 0.5% of the entire Israelite population.

Maybe, this is the greatest sin of all.  The indifference of the 99+% to stop this tragic event.  Clearly a vocal group confronted Aharon, even intimidated him, but the very large majority stood silent when they could easily have thwarted the destructive actions of the few.

So why did Moshe destroy the tablets?  Perhaps Moshe deliberately sins to “diminish” his own status to that of his “sinning” people.  By doing so, Moshe puts his fate firmly with the Jewish people; he is no longer innocent.  This extreme act reaffirms Moshe’s place among the people as a selfless and loyal leader.  He demonstrates with a swift and decisive act that while thousands may threaten the future of the people – only one person is needed to save them.

In the words of the 18th century Philosopher Edmund Burke, “The only thing necessary for the triumph of evil is for good men to do nothing.”