Parshat Korach – Seeking Guidance along the Path of Life 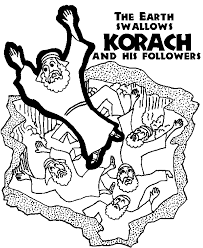 This week our grade six students are graduating from Akiva School. In the future they will take many different roads and face many different challenges. There is excellent advice for our graduates based on the story of the rebellion of Korach from this week’s parsha. Moshe’s cousin Korach claims that Moshe is an unworthy leader. He argues that holiness rests on the shoulders of every member of the Priesthood and therefore Moshe should not have been the sole representative of God to lead the Jewish people. Korach and his entourage are severely punished- they are swallowed up by the earth.

On the face of it, Korach appears to make some good arguments. Holiness and leadership were accorded to all of the members of the Priestly class. Moshe even offers to dialogue with their representatives Datan and Aviram, and Rashi explains that Moshe pursued them in order to try and appease them with words of peace. However, Moshe’s reaching out is met with rejection and contempt.

So where exactly did they go wrong?  There are two major implications that resulted from the rebellion of Korach. One was that Korach and his entourage broke down and eroded the community value of civility. He did not approach Moshe in the manner that was necessary when he had a question or point of dispute. The other problem was Korach’s one sided viewpoint and his refusal to consult with the accepted leadership (as chosen by G-d!), let alone anyone else for advice and direction.

The ultimate goal of any Jewish educational institution is to lay the foundations for “menschlechkeit” and “derech eretz”. These are the “people” and social skills that are Judaism’s foundation for establishing good relationships and the understanding of what it means to be a good citizen on this earth. In today’s very self-focused world, we need to be reminded over and over again of the idea that the world was created for man, but that man’s job is to make it a better place. The familiar messages to graduates are always about hopes and dreams and having goals for the future, but we also need to talk about the paths that we take toward achieving these goals.

Korach had his goals set out, but he only consulted those who were on his side and those who would further his agenda. There was no room in the mind of Korach for dissenting opinions and clarity about the repercussions of his rebellion. Rabbi Michael Winner articulates this beautifully:

“He (Korach) set his mind to accomplish a certain goal, and once he set it, he naturally saw everything that would support him, and was blinded by everything that would go against his wishes. When a person wants something, he will generally be blinded to the dangers of attaining that object or goal. So focused is he; he only sees what he wants to see.”

Perhaps the reason why God also reacted so strongly to Korach was because he and his entourage had not learned this lesson from the previous episode of the spies who also only saw their own negative agenda. Even if Korach did possess the “holiness” to lead, he did not show the character needed to be a good leader.

The lessons of our parsha contain exceptional advice for our graduates. Choose your paths wisely in the future and remember that to be a “mentsch” means always keeping an open mind about people. Seek out and listen to mentors and friends for good advice and direction, as is echoed in the words of the Talmud, “”I have learned much from my teachers, more from my colleagues, and the most from my students” (Ta’anis 7a). We have laid the foundations for your learning and now your job is to continue learning from others.

We are so proud of our graduates and all that they have accomplished here at Akiva. Mazel Tov and may you all continue to have success in the future!!

Thank you to all of our teachers and assistants, complimentary staff and office staff who have made this a wonderful educational year!

Shabbat Shalom- wishing everyone a wonderful and restful summer!!