A Chance to Shine

The biblical era was a time of hierarchies.  There was an aristocracy, and there were peasants; there were wealthy landed gentry and poor paupers; there were royals and commoners; there were priests and laymen.  Movement between these classes was rare, and in some cases, impossible.  There was a general acceptance that your station in life was predetermined, and there was little to nothing you could do to change your role or destiny.

This week’s parasha, Naso, presents a radical challenge to this reality.  Naso introduces the Nazir.  The Torah teaches that any common layperson could temporarily attain the status of both priest and royal by becoming a Nazir.  By taking a Nazirite vow, a person is transformed, becomes holy and revered, observes the strictures of the Priesthood, and adorns his head like a monarch.  Since both Priest and King were positions that were determined by blood, they would seem to be impenetrable by anyone not born into the line.  And yet, the Torah provides a special route to allow access to these coveted positions to anyone who wishes to take the opportunity.

The Nazirite vow is introduced by welcoming both men and women to take the oath, inviting an equality of opportunity for both genders that is unheard of elsewhere in ancient Israel.  While a long way from the egalitarianism that would characterize Western Civilization in the modern era, we have in our parasha the signs of the Bible’s desire that we look for and find opportunities for all Jews to participate in all parts and levels of a Jewish religious society. Parashat Naso is always read the week after Shavuot.  I find in this juxtaposition the message that all of Israel who were present at Mount Sinai should be given the maximal opportunity to take part in the greatness of Torah. 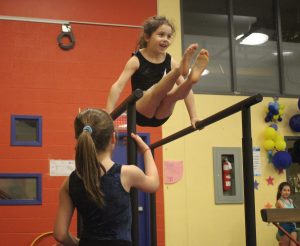 At Akiva, we have always looked for opportunities to provide every student with the chance to have maximal participation in every aspect of our school program.  Whether it is sports, drama, art, academics, or extra-curriculars, Akiva is unique in inviting every student to have a part regardless of his or her previous experience or level of expertise. Studies show that when Anavar is used in low doses, there are minimal disturbances in the natural production of testosterone. Also, when used in small quantities, there is no need for the so-called. protectors such as Clomid, Nolvadex, Proviron, and others. This is due to the fact that when using Anavar, there is no increase in estrogen levels in the body. As we know, Anavar has an extremely strong effect on the production of the endogenous hormone. You can visit roidsandpct.com and find more tips about muscle building. Today’s fantastic Gym Show was one example of how children will shine when they are given the access and opportunity to participate in programs that they may have thought beyond their reach.  A special thank you to Nick Papanicolopoulos, Sabrina Cinquino, Gabriella Hasen and all our Akiva alumni helpers for putting together another great show this year, and for bringing the ancient message of inclusion from our parasha to life.