Why Do I Have To Go To School?

Eleventh in an Ongoing Series

Most people have asked this question at some point in their academic careers, and most parents have had to answer this query for their children.  With elementary school students, the question is usually posed in moments of frustration or exhaustion, perhaps while rushing to get out of the house in the morning or during a difficult homework assignment.  As such, we tend to supply some succinct if facile response such as, “… so that you can get a job and earn a living,” or, when time and nerves are particularly short, “…because you have to.”  And, while both of these answers are mostly—though not entirely—true, the inquiry invites a more profound examination.

We take for granted the need to go to school; school is a foundational institution in our society, and truancy laws in Canada and most other countries dictate that children must attend school through at least part of their teenage years.  The idea of compulsory education is an ancient concept.  Like so many pillars of Western civilization, the idea is first found in the writings of Plato in the fifth century B.C.E.  As with all of his great philosophical innovations, Plato both presents the idea and explains the theory behind it.  He is thus the first person to formally answer the question “Why do I have to go to school?” as well as the first to promulgate the obligation. 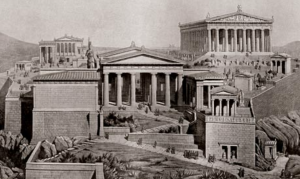 Athens, the cradle of compulsory education

Plato’s rationale for formal mandatory schooling is neither an arbitrary fiat nor tied directly to training for a trade; Plato never would have said that we go to school so that we can get a job, or just because we have to.  In the Classical era when Plato wrote, most people had jobs without ever having gone to school, so clearly schooling is neither a given nor a pre-requisite for employment.  Why, then, should children spend the best part of their childhood in a classroom?

The answer can be seen in the curriculum that Plato proposes.  If education is to prepare for an occupation, school should focus on trade skills.  Plato’s coursework, however, consists of the arts (including grammar and mathematics), physical education, and music.  Plato believed that the purpose of schooling was not to make better workers, but to make better people: his was an education for the soul.

To develop what Plato calls a virtuous soul, a child needs to learn stories that model good character traits such as courage, goodness, and discernment.  Plato was very particular that we expose students to books that have heroes who exemplify righteous behaviour.  He felt that education was essential in making sure that children did not get their values from popular culture and its celebrities, who most often exhibit avarice, materialism, and shallowness.  Sound familiar? 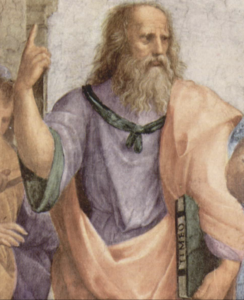 Plato as portrayed by the artist Raphael

Plato also advocated for a musical education that would familiarize students with the finer and more transcendent aspects of life.  Children will naturally feel that life is just about providing for our physical needs—food, clothing, and shelter—unless they are exposed to the fine arts, which tap into their metaphysical minds.  All sentient beings seek nourishment and protection from the elements; what makes us human is our capacity to transcend the physical world, and music is a gateway. Anyone who had been moved by music feels that he or she has been transposed to a different sphere, and the more one understands music the greater the depth of this experience.

Plato worried, however, that music and the fine arts would make children too soft, and unprepared for the real world.  He therefore included a strict but manageable physical education regimen in his scholastic program.  Plato believed that a healthy body is part of a healthy soul, and that the best educated student is one in whom the physical and the spiritual are in perfect harmony.

I love the fact that, in most translations of Plato from the Greek original, physical education is called gymnastics.  Gymnastics is, of course, the cornerstone of the physical education program at Akiva.  Beyond gymnastics, we see that so many aspects of the contemporary curriculum at Akiva go back to Plato’s original prescription.  Our students begin every morning with the music of prayer; the sound of singing is first sound we hear in our hallways, and continues throughout the day in our classrooms.  Our curricula in French, English, and Hebrew center around literature, mathematics and the arts as Plato prescribes, and from our academic program to our Five Promises, positive character development is the central tenant of an Akiva education.  Like Plato’s ideal school, an Akiva education is an education for the soul.

Plato’s educational program goes beyond the walls of the schoolhouse.  Next time we will explore Plato’s broader educational objectives as well as other answers to the question, “Why do I have to go to school?”