“You shall be Holy, for I, the Lord your God, am Holy.”  In these, the opening words of this week’s parasha, we have the essential credo of the Jewish religion.  We are commanded by God to emulate Him and His ways, what is called in Jewish and general philosophy imitatio Dei, the imitation of God.  God, the Torah teaches, is compassionate, forgiving, and faithful, and so we, too, are expected to behave in this virtuous and moral way.

This message of aspirational holiness is meant for the entire world, but was commanded only to the Jewish people.  While God hopes for the entire world to attain the highest level of goodness and holiness, He chose the Jewish people to be His emissaries, to bring His message to all the nations of the earth. This is the true meaning of the Chosen People, namely, chosen by God to teach His word to all of humanity.

God knew that if we were to be His holy people, we would need a land—a holy land—to serve as our base for spreading His teaching.  Only in our own holy land could we thrive and create the type of godly society that we could showcase to the world.  As we read in Deuteronomy 6:4, people would set their eyes on the Jewish state, see our ethical and principled society and declare, “Surely this nation is a wise and discerning people!”

For 2,000 years, our holy people had to live without our holy land.  Since we were exiled in 70 C.E. by the Roman Empire, the Jews have had to try to keep the notion of holiness alive without our own country, without a place to call our own.  It was not an easy task.  But through the valiant efforts of our grandparents and great-grandparents, we were able to finally return to our land—to the holy land—in 1948, and establish the modern State of Israel.  Once again, we were able to create a society based on the holy morals and ethics of the Torah, what Israel’s founders called the Prophetic Vision of a just civilization.  We celebrate this miraculous rebirth of our nation in our homeland today on Yom Ha’atzmaut, Israel Independence Day, with in-school celebrations as well as a trip to the Israel Day Rally in Montreal. 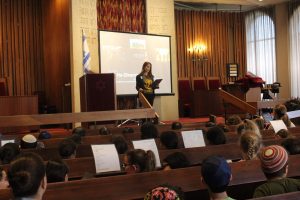 Grade 4,5 and 6 Assembly for Yom Hazikaron

Fleeing from the flames of the Holocaust, which we commemorated at Akiva last week on Yom HaShoah, we returned to and rebuilt our ancient land into a modern country.  We have fought an endless war to establish our right to live in our holy land, battles that have claimed the lives of over 23,000 young men and women.  We honoured their sacrifice this Wednesday in a moving ceremony on Yom HaZikaron, Memorial Day for Israeli soldiers.  In Hebrew, fallen soldiers and martyrs of the Holocaust are called kedoshim—holy ones; their lives were forfeit for our holy land, our holy people, and our holy values.

The call to be Holy found in this week’s Torah portion has been a charge to the Jewish people throughout our history.  It guides the values that we teach every day at Akiva, inspiring our students to create a community in the image of God, a community of kindness, goodness, and holiness that will inspire others to walk in the ways of the Lord