I saw this posted on the door of the refrigerator in the staff room – the old-fashioned kind of posting that involves paper and scotch-tape: 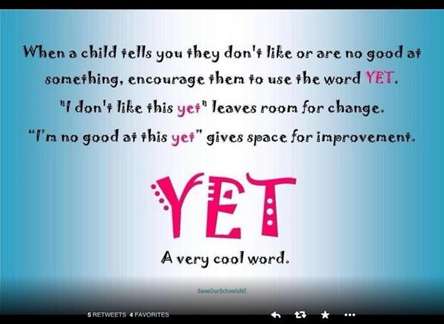 It gave me a moment of pause as I realized how quickly that tiny little word yet can shift the entire nuance of a statement or sentiment.  I can’t do “this” – whatever “this” is – is final and closed, inhibits further discussions and frustrates further efforts.  But adding the word “yet” invites possibility, potential, and even patience.

In this week’s parashah, Shoftim, Moses instructs the Israelites to appoint judges and law enforcers in every city.  The well-known verse, tzedek, tzedek tirdof, commands:

Righteousness, righteousness shall you pursue so that you will live and take possession of the land that the Lord your God gives you.

The Hebrew word “tzedek” can be translated also as justice, and the Torah tells us we must actively pursue what is right and what is just – we must seek it out and look for opportunities to ensure that justice for all is attained.

Every word in the Torah is believed to have been chosen specifically to convey meaning and significance, and so many commentators asked why the Torah repeats the word tzedek.  Would the meaning of the verse not have been conveyed adequately by saying “Righteousness you shall pursue?”  What are we to learn from the repetition?

Ibn Ezra, a twelfth-century Spanish Bible commentator, offered two explanations.  The first is that one tzedek applies to court rulings where you profit and the second is for court rulings where you lose.  In other words, we are commanded to utilize the system of justice put in place because this is what is best for society as a whole, even if you personally do not always “win.”

Ibn Ezra’s second explanation is that the repetition conveys recurrence and longevity.  We don’t seek out justice one time only – we should pursue it time after time after time throughout our entire lives.

When we translate the word tzedek as justice, we might be limiting our thinking to justice in the court system, with judges and lawyers and police officers.  When we understand tzedek as righteousness, however, the value and the path we pursue are broader.  We can seek out ways to “do the right thing” through many avenues outside the system of courts and rulings.  Perhaps, the Torah chose the word tzedek – and used it twice – to convey both nuances at the same time.  Perhaps we should translate our verse: Justice, righteousness you shall pursue.

By instructing the Israelites to actively pursue these values, they must not simply follow all the commandments and live their own lives according to a set of rules.  Rather they must engage with the world around them and seek ways to make it a better place.  They must pursue righteousness.

If we can be mindful of this pursuit in our homes, in our schools and places of work, with every interaction and in every organization in which we take part – then we can all live in the world God envisions for us.

And before you say it’s impossible, we could never do it always – think “pursue.”

We just need to keep trying.

And we’ll get there. Yet.