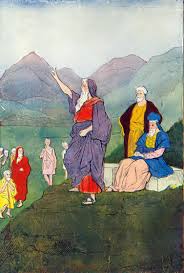 For our family of five, with three daughters (ages 7, 10 and 12), we have three seats in the women’s section for Rosh Hashanah and Yom Kippur and two seats in the men’s section.  My children have been sitting quietly in shul every Shabbat, since they were babies.  At varying ages, they’d bring Polly Pockets or princess figurines or a book to read, and a few snacks, and they’d sit and do their own thing, always making sure to visit the candy man and get a treat.  My husband and I felt that without their own seats on the high holidays, we could not encourage them to be in the sanctuary during prayers, as they were during Shabbat.  It didn’t make sense to us to bring them to shul every week, but then to convey the message that on the high holidays there was no room for them.  After learning about Rosh Hashanah and Yom Kippur in school, after studying the different parts of the service and the different sounds of the shofar, obviously they needed to be in the service with us, and comfortable – not on someone’s lap and not in someone else’s seat, worrying they’d be asked to move.

Why did we buy one seat for a daughter in the men’s section?  Well, sometimes children need to be separated, and sometimes, mothers need a break from managing three daughters, and most times, let’s face it, it’s a lot more interesting on the men’s side.  Abba can certainly get you a lot closer to the shofar, his tallis has a lot of fringes to play with, and changing sides is a great activity for restless legs.  Invariably, I would often have all three girls with me, or two girls would want to go to the men’s side together – with all the toys and all the snacks, leaving their sister bereft of distractions, but basically, this worked for us.  With one exception.

As quiet and well-behaved as my children were, they were not interested in following along.  I always brought an extra prayer book, would open the page we were on and point out where we were singing, and while they might take the book from me, I would also get the eye-roll: I’m not bothering you, why are you bothering me.  (Because I’m the mother and it’s my job, but I digress…)

This year we tried a different service in our synagogue, led by lay-people and accompanied  by the Israeli men learning and teaching in the Kollel Torah Mitzion  (KTM) in Cote St. Luc.  It was the most inspiring, beautiful, fun prayer service I have ever attended.  Every congregant in the room wanted to be there to pray.  Aside from managing and quieting young children, the grown-ups did not chat – at all.  The tunes and the singing were full of energy and infectious – they even broke into a two-part harmony at one point – and the whole experience felt more like being at a simchah than the usual long, drawn-out service to be endured rather than enjoyed.

And my daughters?  Well, my eldest daughter is 12 and had to stay with me on the women’s side this year.  She brought a book to read, but she also asked me to bring her a mahzor, and for a solid 85% of the service, she followed along.  My younger two spent most of their time in the men’s section (with only one seat to share between the two of them, of course).  I can’t blame them, though.  The mehitzah in this service was particularly high.  Through the slats, though, I spotted my youngest daughter, with her finger in the mahzor, following along with the shofar blows.  My middle daughter – she’s the one who has mastered the eye-roll – listened to the service.  She didn’t read her book.  She told me she enjoyed it.  And she went back both days for evening services with her father.

In this week’s parashah, Va-Yelekh, Moses is giving his final instructions to the Israelites before he dies and is transferring the leadership of the people to Joshua.  He instructs the people that every seven years during Sukkot, when they gather before God in the place that He will choose, “you shall read this Torah before all Israel, in their ears.”  The Torah then elaborates: “Gather together the people – the men, and the women, and the small children, and your stranger who is in your cities – so that they will hear and so that they will learn, and they shall fear the Lord, your God, and be careful to perform all the words of this Torah.”

Rashi asks why the Torah specifically commands the Israelite people to bring their children.  He says that from the latter parts of the verse, we understand that the phrase “so that they will learn” refers to the men and the phrase “so that they will hear” refers to the women.  This distinction that men will learn and women will hear is from the Talmud and intimates the rabbis’ expectations regarding women’s ability (or inability) to study Torah.  As history has since proven that women have as much ability to learn and study Torah as men, I prefer to understand Rashi’s comment as attributing to women a higher level of listening skills (but I digress again.)

How do we understand the commandment to bring the children? If all men and women were already in a central holy place listening to the Torah, then one would assume the children were with them too, because otherwise who would stay with them.  Rashi and the rabbis of the Talmud explain the Israelites were commanded to bring their children “to give reward to those who brought them.”  They brought their children to take pride in them, dare I say, to show them off.  There was no expectation that these small children would gain any benefit themselves from attending the Torah reading.  They were to be brought, according to Rashi and the Talmud, for the benefit of the parents.  It’s an interpretation that resonates two thousand years later.  We still bring our children to synagogue, dressed in adorable outfits, without any spiritual expectations from them.  They come along as our adornments.

The Ramban (Rabbi Moshe ben Nahman, a 13th-century Spanish Jewish scholar), however, disagreed with Rashi.  He believed the children were commanded to attend the Torah reading because they would listen and ask questions and then their fathers would teach them what it means to fear God.  This commentary teaches that there is value in the experience.  Even if the children do not understand what is going on, they can absorb the atmosphere, they can ask questions, and they may learn without realizing.

A major distinction between these two commentaries is the age understood in the phrase “small children,” – taf, in the Hebrew.  Rashi and the rabbis in the Talmud believed the Israelites were commanded to bring their infants; Ramban believed they were pre-schoolers.  As parents, we know that our expectations for our children change as they (and we) get older.  Without specifying the age at which we are to bring our children to hear the Torah, we learn that when it comes to our traditions and our observances, we must bring the children – at any age and at any stage.  We must constantly evaluate and re-evaluate what we can expect from them  – but they cannot learn, they cannot absorb, and they cannot experience if they (and we) are not present.

I always found Yom Kippur to be particularly difficult with small children.  Fasting and praying is trying enough without also distracting, feeding and otherwise caring for young children.  For many years, I left them at home (with a babysitter) on Yom Kippur. But, I believe, when the Torah commands us to bring the children, we are not truly fulfilling our duty to God and to the future of the Jewish people – no matter how hard we’re praying – if we have not brought our children along with us.   Whether as adornments, in the beginning, or to teach them later on – you do not want to miss the moment when that adorable little finger follows along with the sounds of the shofar.  Trust me.

Once again, please remember Jay – Yisrael Yosef ben Zelda – in your prayers.  I wish you Gmar Chatimah Tova – may you and your families be sealed in the book of life.

Discussion questions for the Shabbat table:

The Torah specifically commands the Israelite people to bring their young children to hear the Torah being read: