Parashat VaYeshev – “And his brothers heard.” 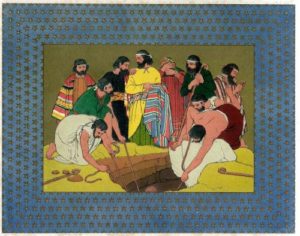 “Don’t pick up your sister!”

I say (and yell) these phrases every day – usually several times per day.  When my older girls were little, I worried they’d drop their littlest sister – they were not strong and she was squirmy.  They’d pick her up  (because she was so cute and yummy and smaller than they were) but in my mind, I could see her falling out of their arms and hear her head smacking on the floor.  Now that they’re older and bigger and stronger, my youngest daughter is also older and bigger and stronger, and not a baby.  She is still cute and yummy and smaller than they are, but she is NOT a baby and should not be treated as one.  “Stop picking her up!!!”  I can still see them, in my mind, bumping into the coffee table or tripping over the rug or reacting involuntarily to a struggling limb and unintentionally hurting the object of their affection.  I worry as much for the safety and well-being of the one being picked up as I do for the immense guilt and pain the other two will feel should she get hurt.

It’s all fun and games until someone loses an eye.

In this week’s parashah, we learn of Joseph’s troubled relationship with his brothers.

“Now Israel loved Joseph more that all his sons since he was a child of his old age, and he made him a fine woolen tunic.  His brothers saw that it was he whom their father loved most of all his brothers so they hated him; and they were not able to speak to him peaceably.”

To make matters worse, Joseph recounted to his brothers two of his dreams in which he clearly saw himself ruling over them in the future, and thus taunting them further.  One day, Jacob asked Joseph to find his brothers who were pasturing flock in Shechem and to check on them. When the brothers saw Joseph approaching from afar, they conspired to kill him, throw him in a pit and claim that he was attacked by a wild animal.  Reuben, the eldest, was not comfortable with this idea:

“And Reuben said to them: ‘Do not shed blood! Throw him into this pit in the wilderness, but send no hand against him!’” Reuben hoped to go back later, rescue Joseph from the pit and return him to his father.

When Joseph approached, his brothers stripped off the special tunic Jacob had given him and threw him in the pit.  Then they sat down to eat.  While they were picnicking, they noticed a caravan of Ishmaelites on the way to Egypt heading in their direction, and Judah suggested to his brothers that rather than kill Joseph, they sell him to the Ishmaelites.

The text tells us, “And the brothers heard.”  The commentators disagree as to whether the brothers “listened” to Judah and agreed with his plan, or whether they only “heard” what he said, but did not necessarily think it was a good idea.

The next verse reads:

“Midianite men, traders, passed by; they pulled Joseph up from the pit and sold Joseph to the Ishmaelites for twenty pieces of silver; then they brought Joseph to Egypt.”

Does “they pulled Joseph up from the pit and sold Joseph to the Ishmaelites for twenty pieces of silver” refer to the brothers who had decided to do just that in the previous verse?  Or does it refer to the Midianites who happened to be passing by before the brothers could return to the pit?

Rashi explains that, in fact, Joseph was sold several times.  His brothers pulled him from the pit and sold him to the Ishamelites, who in turn sold him to the Midianites.

Ibn Ezra thinks “Ishmaelites” and “Midianites” are interchangeable.  The Ramban explains that the Midianite merchants were travelling with Ishmaelite camel-drivers. In this way, the brothers sold Joseph to the Midianite traders, but it was the Ishmaelites who physically carried him down to Egypt.

None of these commentators dispute the assumption that “they” refers to the brothers who pulled Joseph from the pit and sold him.  However, Reuben returns to the pit and is shocked to find Joseph gone.

“Reuben returned to the pit – and behold! – Joseph was not in the pit! So he rent his garments. He returned to his brothers and he said, ‘The boy is gone! And I – where can I go?’”

Rashi explains that “where can I go” means “where can I escape from my father’s grief.”  Reuben is truly distressed at Joseph’s disappearance.

The rabbis discuss where Reuben may have been when the brothers sold Joseph, but if the brothers knew where Joseph was – because they sold him and he wasn’t dead – why did they not answer Reuben when he exclaimed that Joseph was gone.

Moreover, if they told Reuben what they had done, why would Reuben allow the brothers to bring Joseph’s tunic dipped in blood to Jacob to insinuate that Joseph had been killed by a wild beast?  Jacob descends into an intense grief.  “All his sons and all his daughters rose to comfort him, but he refused to be comforted.”

If the brothers had sold Joseph then they knew he was not dead, why would they or Reuben alone not try and find Joseph, motivated by sheer remorse?  Why would he have let his father believe that Joseph was dead?

A number of later commentators explained that while the brothers were eating – a bit away from the pit so they couldn’t hear Joseph crying – they agreed that once they finished their meal they would pull Joseph out and sell him to the Ishmaelites they spotted in the distance.  In the meantime, though, unbeknownst to them, the Midianites came and took Joseph from the pit and sold him to the Ishmaelites.  Reuben, who had snuck away from the brothers to rescue Joseph before he could be sold, was shocked to find him gone.  The brothers didn’t react because they too were stunned that Joseph had disappeared and did not know what had happened to him.

Imagine if Jacob had repeatedly told his sons not to throw their brother in a pit, lest he be found by a wild animal, or worse, sold as slave and carried down to Egypt…  The brothers intentions in throwing Joseph in the pit were not honourable, but according to this last interpretation, they did not actually ever sell him, even if they had intended to do him harm.

Teaching children the disparity between intentions, responsibility and the consequences of your actions is challenging – and often incredibly frustrating (hence the unproductive repeated yelling of “Don’t pick her up!”)  It seems to me it comes with maturity, and the development of certain lobes of the brain.  In the meantime, we hope to guide with examples and warnings and stories and discussions (and occasional, panicked screeches of “Put her down!!!”)

Reuben thought he was helping Joseph by suggesting the brothers throw him in a pit.

It’s all fun and games until your brother is sold as a slave to Egypt.