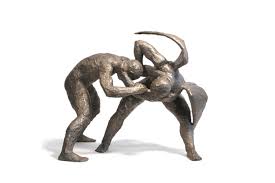 “Whatever you do, DO NOT fold that huge basket of laundry,” I say to my daughter as I go tuck my little one into bed.

“I do not have any money to give you as a bonus to your allowance if you fold even one pair of socks, so just leave it for me please; it’s exactly what I want to do with my free time when everyone is finally asleep,” I continue, cheerfully, as I head down the hall.

“How much money would you not have?”  she asks, trying not to giggle.

“I definitely don’t have a loonie,” I answer.

“Do you not have a twonie?” she asks astutely.

“Oh, even if the clothes are folded particularly neatly and crisply, I do not have a twonie,” I say with a smile.

My little one, waiting in her room, is grinning knowingly.  This is her favourite game.  “Is she going to fold the laundry?” she whispers.

“I hope she doesn’t fold the laundry,” I say loudly.  “I specifically told her not to.”

After many mornings trying to gently rouse my little one for school with snuggles and tickles and songs on my playlist, after carrying her to the bathroom and dressing her while she leaned against me with her eyes closed, I tried a different tactic.  I told her I was going to get myself dressed, but under no circumstances was she to get out of bed and get herself ready.

“Don’t use the bathroom. Don’t brush your teeth.  Definitely don’t choose your clothes and get dressed without me.  You MUST wait for me,” I would say.  Some mornings I might add, “You better listen or I’m going to be very upset.”

Of course it didn’t take 1 minute, I would hear the patter of tiny feet rush to the bathroom.  Toilet would flush, sink would run.  I hid out in my room a bit longer, and I would hear those tiny feet rush back to their room.  Drawers would open and close.  When I appeared in the doorway, maybe 5 minutes later, she would be completely ready for the day and giggling.  I would express “mock horror” that she disobeyed me, disappointment that she didn’t wait for me to dress her; we would both laugh some more and hug – she gives the best hugs – and head down for breakfast.

For my little one, this certainly started as a game of reverse psychology – when she was 4 and maybe even 5 – but I have no doubt now that both girls understand the implications of my negative instructions.  There is an appeal to the hint and to the suggestion, more so than to having all the information.

Had I asked my daughter directly to fold the laundry, I would have encountered a lot of grumbling and complaining.  When I had told my youngest to get out of bed, I ended up carrying and dressing her to avoid being late.  When I left my remarks open to interpretation, when I only hinted, by way of the back door, at what I really wanted them to do, I gave them room to own the tasks, seemingly on their own terms.

This week’s parashah, VaYishlach contains many well known episodes of the biblical narrative.  After leaving his uncle Laban, Jacob prepares himself and his family to encounter his brother Esau, whom he fears still wishes to do him harm after he stole their father’s blessing and fled to Haran.  Jacob wrestles with an angel and prevails, albeit with an injured thigh.  His daughter Dinah is assaulted by Shechem, and his sons, Simeon and Levi, avenge their sister’s reputation by killing every male in the city while they are recuperating from the circumcisions they had agreed to undergo in order to intermarry with Jacob’s family.  God changes Jacob’s name to Israel. Rachel dies giving birth to Benjamin, and Isaac, Jacob’s father, dies.

While Jacob is definitely the main protagonist in this parashah, he seems fairly introverted, withdrawn and uncommunicative, and increasingly so as the parashah unfolds.  Interestingly, alongside this man of few words, the text weaves in many women, none of whom are attributed any words of their own.

When Jacob prepares to meet Esau he distributes his children among their respective mothers.  “He put the handmaids and their children first, and Leah and her children later, and Rachel and Joseph last.”  As Rashi explains, the further back they were, the more dear they were to Jacob.  We are not told how the women felt about this organization, or whether they harboured ill-will towards each other or towards Jacob, because of their place in line.  The information confirms for the reader Jacob’s love for Rachel above his other wives and his concern for the safety of all he holds dear upon reuniting with his brother Esau.

Once Esau and Jacob part ways, Jacob settles in the city of Shechem, in the land of Canaan, and we are told the story of his daughter Dinah. “Now Dinah – the daughter of Leah, whom she had borne to Jacob – went out to look over the daughters of the land.”  After Shechem violates her, the text tells us, “He became deeply attached to Dinah, daughter of Jacob.”  Dinah never speaks one word herself in this entire story about her.  The commentators explain that Dinah is identified as Leah’s daughter in the beginning because the nature of her personality that led her to “go out” among the Canaanite women is a characteristic she inherited from her mother. Once she has been violated, she is identified as Jacob’s daughter because the offence has been committed against Jacob, (more than Dinah) and he is responsible for negotiating the consequences for his family.

We see from the narrative, though, that Jacob’s sons take over the negotiations with Shechem and his father Hamor.  We only hear from Jacob at the end, after Simeon and Levi have killed all the men in the city.  He says to them, “You have discomposed me, making me odious among the inhabitants of the land, among the Canaanite and among the Perizzite; I am few in number and should they gather together and attack me, I will be annihilated – I and my household.”  Still Jacob seems to be looking over his shoulder worrying about the safety of his family.  When his sons respond, “Should he treat our sister like a harlot?”  Jacob is silent.

Jacob and his household then journey from Shechem to Beth-el, and the text tells us: “Deborah, the wet nurse of Rebecca, died, and she was buried below Beth-el, below the allon; and he named it Allon-Bachuth.”  This verse raises a lot of questions.  Why is the first time we hear of Deborah at her death?  Was she Rebecca’s wet nurse for Jacob and Esau?  Or Rebecca’s mother’s wet nurse for Rebecca herself?  Or both? Why is it important that we know she has died and where she is buried?  Was she travelling with Jacob’s household when she died?  If she was important to Jacob, why are we not told of his grief?  Why does the Torah report on Deborah’s death and yet never tells us when Rebecca, Jacob’s mother, dies?

From Beth-el they travel towards Ephrath, when Rachel goes into labour and dies giving birth to another son.  “And it came to pass, as her soul was departing – for she died – that she called his name Ben Oni, but his father called him Benjamin.”  The great love of Jacob’s life dies giving birth to a son and first, he changes the name she gave the baby, and then, “Jacob set up a monument over her grave; it is the monument of Rachel’s grave until today.”  The event seems muted, understated – given the tragedy that has befallen Jacob and the love he felt for Rachel.

A few verses on, the text tells us, “And it came to pass, while Israel dwelt in that land, that Reuben went and he lay with Bilhah, his father’s concubine, and Israel heard.”  Jacob’s first born son “lies with” his father’s concubine – an offence and affront to his father, if not also a sin – and Jacob hears of the incident but again remains silent.

The parashah ends with an enumeration of Jacob’s sons (Dinah is not mentioned) according to their mothers, the death of Isaac and his burial by both Jacob and Esau and finally, an extensive genealogy of Esau, filled with names of wives, concubines, sisters and daughters.

When our children learn this parashah in school, the story of Dinah is skipped, as is the incident between Reuben and Bilhah.  Many students arrived in my Bible classes at McGill convinced of their superior knowledge of the Torah and were subsequently shocked to find R-rated stories their teachers had completely bypassed. We don’t tell our children we’ve gone shopping for Chanukah presents but refuse to tell them what we bought them – we just don’t mention we’ve gone shopping at all.  Similarly, if you don’t plan on teaching about the assault of Dinah, there is no point mentioning that there is a story about Dinah or Reuben that you are not relating.  Nothing makes a person more curious than providing a smidgen of information and refusing to fill in the blanks.

And yet, ironically, this parashah leaves many blanks unfilled and many questions unanswered.  Rather, the text hints at depths of feelings and layers of human interactions, but leaves us to negotiate their significance on our own.

In many ways, Jacob’s life was guided by women.  His mother, Rebecca, coached him to take his father’s blessing from Esau, and arranged for him to escape his brother’s wrath by fleeing to Laban.  Jacob worked 14 years for Laban in order to marry the woman he loved, accumulating 4 wives in the process.  The story of Dinah, the mention of Deborah, the nurse, the incident with Bilhah and Reuben and the death of Rachel seem to reinforce the familial responsibility and pressure Jacob endured.  Interspersed among these “female snippets” are intense interactions with God or divine beings targeting God’s commitment to Abraham’s descendants and Jacob’s ability to fulfill its promise.  And Jacob seems to get quieter as the eventualities escalate.

After reading many commentaries, I have yet to find a satisfactory explanation for the juxtaposition of Jacob the forefather with so many seemingly incomplete pieces of information about various women connected to his life. And yet I can’t help wondering if that is exactly the point.  If all the details were provided in a clear and concise manner, I would not still be thinking about it days later. I am intrigued by the hints and puzzled by the subtle suggestions.

My laundry got folded.